Have you been invited to Jeff Siegel’s webinar called 10 Day Jackpots but have no idea what to make of it?

Angel Publishing has been promoting the event and from the looks of it, Jeff intends to reveal a strategy that he thinks has the potential to bring you big gains in a matter of days.

In this review, I give you an overview of the webinar to help you understand what to expect from Jeff when he broadcasts it.

What are 10 Day Jackpots?

Angel Publishing recently released an invitation to Jeff Siegel’s 10 Day Jackpots, an event that will take place on January 21, 2021.

Angel Publishing is an independent research firm that provides retail investors with well-researched investment ideas. It has a couple of investment analysts in its books who publish their insights through it. Its philosophy is limited government, free markets, and unrestricted freedom of speech. 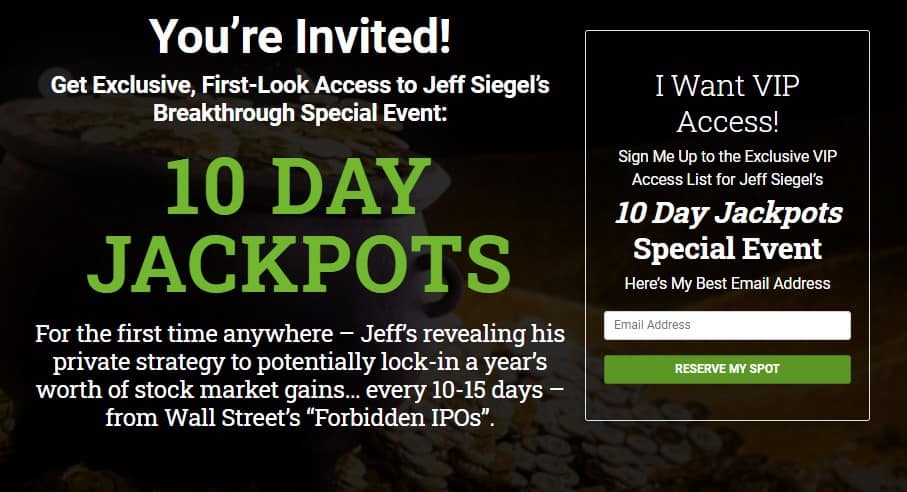 This is the first event they are broadcasting to Jeff’s followers this year and it will be about investing in the IPO market. In the invitation, Jeff mentions that investing in companies with IPOs is quite lucrative. He also says that this year has no shortage of companies looking to go public making it a “hot IPO market.”

He acknowledges that, in the past, retail investors were locked out of private investments because the law required them to be accredited, which is not achievable for most people. But that was before President Obama signed into law the JOBS Act in 2012.

In the invite, Jeff then says that his strategy is called 10-Day Jackpots and it will be about revealing the once inaccessible IPOs (or “forbidden IPOs”) to his followers.

Who is Jeff Siegel?

Jeff Siegel is on the editorial team of Angel Publishing. He is the managing editor of an advisory service called Green Chip Stocks. The term “green chip stocks” refers to companies that engage in sustainable practices. This includes alternative energy, agriculture, and the likes. He named his service that way because it focuses on those kinds of businesses.

He also edits two other newsletters, namely Energy and Capital and Wealth Daily.

Between 1994 and 2001, Jeff Siegel worked for Agora Publishing, which is one of the largest financial newsletter publishers in the world (I have reviewed it and you can read that via the link).

After his stint with Agora Publishing, he packed his bags and decided to travel across the world looking for mega-trends. He realized that the alternative markets were not as well-known as the others although the potential was there.

Therefore, he started telling people to take alternative energy and sustainability seriously because he believed that there was an opportunity to make money there. He has pretty much stuck to his guns about the industry ever since.

When he is not writing articles or editing his newsletters, Jeff is a consultant. He has even been featured on Bloomsberg Asia, CNBC, and Fox. He has also written a book called Investing in Renewable Energy: Making Money on Green Chip Stocks.

You can watch the webinar as it happens by registering for it. This involves sharing your email address (in the text box):

You will attend the webinar free of charge; this also applies to people who are not subscribers to any of Jeff’s newsletters.

If you miss the event, you can access the recording for free; this typically happens during these financial webinars.

The 10 Day Jackpots webinar is legit.

Jeff Siegel is one of the chief advocates of investing in alternative energy and businesses that engage in sustainable practices. He is a go-to resource when it comes to “green chip stocks.” This has earned him appearances on mainstream media outlets like CNBC and Fox.

On top of that, Jeff has released presentations in the past, some of which I have reviewed here including [INSERT]. In each of those reviews, I have given Jeff a clean bill of health and I don’t think it is different this time.

My Final Word on 10 Day Jackpots

Other than cryptocurrencies and 5G stocks, it appears IPOs are all the rage right now with several gurus urging their followers to consider adding them to their portfolios. They all argue that investing in private companies right before they go public is a nice way to earn quick returns in a short period.

What this strategy assumes is that once the company gets listed, its shares will “jump” by a large margin thus earning you big profits quickly. There is a good chance that this is what Jeff Siegel will focus on during his webinar.

I should mention that although it sounds great on paper, investing in private companies right before they get listed does not guarantee gains. There have been cautionary tales of companies that have crashed right after the IPO thus eating away at people’s investments.