Have you come across an invitation to The 1600 Success Summit but have no idea what it is about?

The event, which is being promoted by the Angels & Entrepreneurs Network, centers on Abe Wagner’s promise to show you how to make money and achieve financial freedom.

After reading the invitation and researching the event, I put together this review to discuss what you should expect Abe Wagner to talk about during the event.

What is Abe Wagner’s 1600 Success Summit?

Abe Wagner will host The 1600 Success Summit on January 21. At the event, he will talk about his money management skills. 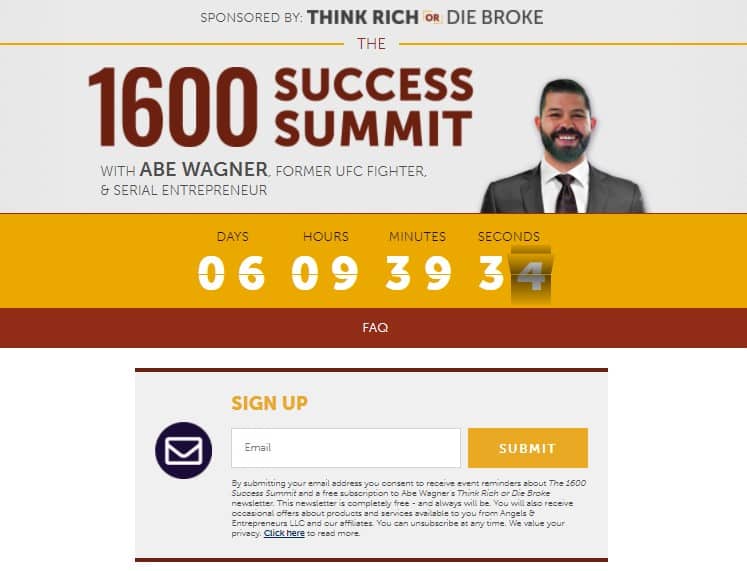 As the invitation indicates, Abe will use the event to talk about money-making strategies that he thinks other people should replicate.

On the other hand, he also talks about all the people who become millionaires in a year. He says that approximately 675,000 Americans make their first $1 million every year and that translates to 1,600 people per day. He says that his tips can help you join them.

He narrates his rags-to-riches story to give credence to his assertion that anybody can become a millionaire. He starts by telling us how he grew up poor before his fortunes changed and that he now runs a couple of businesses that earn him $300,000 per month without requiring him to spend more than four hours each day on them.

Who is Abe Wagner?

I have to admit that before this summit, I was unaware of Abe Wagner’s foray into the world of entrepreneurship as I am certain most people are. He has always been known as a professional UFC fighter and mixed martial artist. He was in the heavyweight division in the UFC.

Abe is also a mechanical engineer with 4 patents to his name.

In recent years, he has been venturing into the world of business. In the last two, he has established two businesses. One is in the construction business and the other is a supplement distributor. Both of them have been quite successful.

Although I can’t quite tell when he joined, he is now a member of the advisory board at Angels & Entrepreneurs Network. He edits a newsletter called Think Rich or Die Broke.

How to watch The 1600 Success Summit

As we’ve seen with other webinars, if you want to watch The 1600 Success Summit as it happens, you have to sign up for it by providing your email address. This will also enable you to receive updates regarding the summit in its lead up. Registering and attending the event is free of charge.

As you sign up for it using your email address, remember that you will be adding it to the mailing list of Abe’s Think Rich or Die Broke. Therefore, don’t be surprised (or annoyed) when you start receiving emails from Abe after registration about other things besides The 1600 Success Summit.

Merits of The 1600 Success Summit

It is free to attend.

The 1600 Success Summit is a legitimate webinar.

It will be hosted by Abe Wagner, who’s part of the advisory board at the Angels & Entrepreneurs Network. Although we don’t know much about Abe as an entrepreneur, we can draw satisfaction from the fact that he is part of a group that we’ve reviewed here before and deemed to be legitimate. Therefore, we can infer that he is also legitimate.

However, that does not mean that he has the key to success and his tips will guarantee that we will become rich. It means that he is worth listening to even without necessarily agreeing with him.

The 1600 Success Summit is an event that Abe Wagner will use to share his opinions on what he thinks is the best way for ordinary people to make enough money to become millionaires. I think he will also promote an advisory service that he wants new members to join.

In the invitation, Abe does not divulge any information we can use to determine what his investment strategy is. He merely talks about his personal story; how he grew up poor and how he became a successful entrepreneur. Since he is relatively new to the finance industry, we also cannot refer to his past to predict what he may be planning to talk about. Therefore, we’ll just have to wait and see what he plans to tackle.