Adam O’Dell recently did a presentation where he introduced a device called “Imperium” that he says has era-defining technology that is set to disrupt the entire global economy in 2021. He even says it may usher in “mankind’s next great leap forward.”

Behind it is a company that will benefit from its device being so important and Adam wants us to invest in it.

Today, I will walk you through the presentation to show out what “Imperium” is. I also reveal the name of the company that makes the device.

What is Adam O’Dell’s Imperium?

The “Imperium” is a device that Adam says is going to spark a new trend that will grow five times faster than the internet. 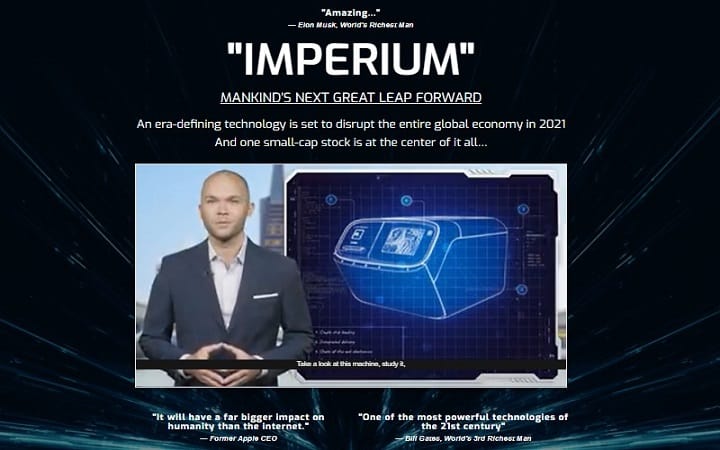 It is a DNA Sequencer that reads DNA and digitizes it (codes it as ‘1s’ and ‘0s’) for storage on a computer. DNA comprises a sequence of six billion letters arranged in unique patterns.

Until the Imperium device was created, Adam says that DNA sequencing was an expensive activity that was not within the reach of ordinary people. The first time scientists sequenced human DNA, it took them 13 years and cost 2.7 billion.

With the new device, the cost has fallen to $239 and it only takes eight hours to read a person’s DNA. Adam says that from an investment perspective, this is significant because it means that DNA sequencing will be affordable and available to the masses. And from observing how other technological revolutions have happened, companies go through the roof when their product is affordable and widely used and that’s what Adam is counting on here.

To elaborate how this will work out, he says that sequencing will have the following applications:

First, it will enable us to fight and possibly get rid of genetic diseases like Hepatitis, Alzheimer’s, Cancer, and lost eyesight, just to mention a few.

It will transform the agricultural and the food and grocery retail industries because scientists will conveniently DNA sequence plants and determine how to breed them to produce superior breeds.

The manufacturing sector will be revolutionized by biological manufacturing. For example, with the genetic information of how spider webs are made, you can make biological spider silk without having to farm spiders.

The Company Making the Imperium Device

Adam says that as “Imperium” goes mainstream, the best candidate to invest in for the DNA sequencing trend will be the one that will own the technology behind it. He says that it will perform as well as Intel did when it delivered the microchip that powered the internet revolution.

The secret company behind the sequencing trend developed a new microchip that processes DNA faster than any other technique.

He says that it will process DNA 10,000 times the speed of the previous technology thanks to its ‘nanowell’ technology (before this was invented, DNA was handled using test tubes).

It has partnered with a few notable companies and among its potential client list are Broad Institute, MIT, Harvard, Microsoft, Illumina, and DARPA (the military’s advanced research branch). DARPA is on record stating that the microchip in Imperium puts the company light-years ahead of its competitors.

Adam wrote a dossier called The Next Intel: The Microchip Company Powering the 199,000% DNA Mega-Trend where he names the company behind Imperium but you don’t have to read that because I think I know its name from those clues.

I think the company that he is referring to here is Twist Bioscience (TWST). It is a San Francisco-based company that manufactures equipment that enables scientists to synthesize DNA faster. They created a silicon wafer studded with nanowells that replaces the 96-well plastic plate that was previously used for DNA sequencing making the whole exercise faster and more efficient.

Twist has partnered with Microsoft and Illumina (two of the clients listed by Adam) to create a data storage mechanism that uses a DNA molecule.

To get a copy of the report Adam wrote about the company, you have to sign up for his newsletter, Green Zone Fortunes.

Who is Adam O’Dell?

Adam O’Dell is an investment analyst and a chartered market technician (CMT). By being a CMT, he knows his way around technical analysis (which CMTs are tested for).

He was behind a presentation called A9 Gold Stocks that was about how you can earn 9x returns by investing in gold.

He was a hedge fund manager before he started writing newsletters. His first job in the world of newsletters was at Money Market where he was a chief investment strategist. He has also worked at Dent Research where he used to edit an investment advisory service called Cycle 9 Alert.

How does Green Zone Fortunes work?

Green Zone Fortunes is an investment newsletter that gives you access to Adam O’Dell’s investment research. It is built on a Green Zone Rating System that filters each entry based on six factors that predict future growth and rates them from zero to 100.

When you sign up for the newsletter, you get:

You can subscribe to Green Zone Fortunes for $47 in your first year and then renew your membership for $79 every year after that.

The subscription has a 365-day money-back guarantee.

Adam O’Dell’s Imperium is a legit presentation about a device that is already in use. It is already sequencing DNA that Twist is selling to companies that use that information to make other products.

It also helps that Adam is an investment analyst who has the CMT designation. While this doesn’t automatically mean that the company making Imperium devices is guaranteed to perform well in the market.

Adam O’Dell believes that in the 202s, biotech companies (and DNA-based ones in particular) will be market leaders just like the 2010s belonged to the FAANG companies. He says that there are signs that this may happen as he notes that biotech stocks have outperformed the S&P 500 by more than 2.5 times in the past six months.

He insists that since DNA technology is not on many investor’s crosshairs, now is the perfect opportunity for you to invest in it. So far, there has been a lot of interest in viral testing and vaccine development due to the pandemic but Adam thinks that there is more to the biotechnology sector than meets the eye.