Paradigm press released a video by Robert Kiyosaki in which he talks about “America’s Final Wealth Transfer.”

According to him, there is a massive wealth redistribution that is taking resources away from the middle and lower classes and transferring them to the rich.

If you have encountered the presentation, you must be wondering what he means by that and how you should react to his claims.

In this article, I reveal the main points he makes in the presentation to help you decide what your next move will be.

What is America’s Final Wealth Transfer?

America’s Final Wealth Transfer is the title of a presentation that Kiyosaki, author of Rich Dad Poor Dad, released to discuss an apparent wealth redistribution that is happening right now. 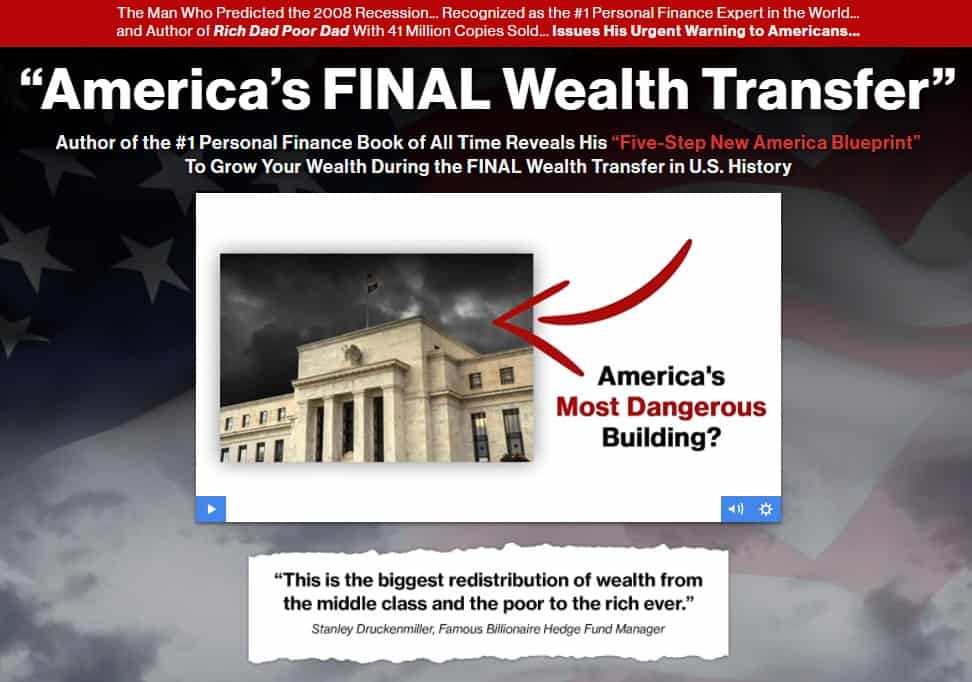 Robert is distrustful of the Federal Reserve, referring to it as a “powerful group of unelected officials that operate in secrecy in Washington D.C.” He is suspicious of it because he says that it was formed by rich men who met and created a privately-owned bank that they duped the public into believing was part of the U.S. government (he is referring to an often-debunked claim that the Fed is a private institution because it is set up like one).

He says that the Federal Reserve’s decision on March 23, 2020, to increase the money supply would end up making the middle class poorer and the wealthy richer. He is referring to the decision by the Fed to print more money to resuscitate the economy. This was at a point when lockdowns were starting to bite and the pandemic was starting to impact the economy.

But he doesn’t see it that way because he believes that monetary policy during recessions disproportionately benefits the upper classes, usually at the expense of the middle and lower classes.

And this time, he says that the middle class “will end as we know it.”

Why is he saying this? He explains that whenever the Fed implements quantitative easing, it always affects asset classes that the rich typically own that makes them richer even when the economy is in bad shape.

What does he want his listeners to do? Well, he proposes a five-step plan that they should follow. We’ll look into it later in this article.

Who is Robert Kiyosaki?

Kiyosaki is an author, real estate investor, and investment analyst.

He is best known as the author of a bestselling book on personal finance called Rich Dad Poor Dad. The book has already sold more than 41 million copies across the globe and has been translated into 51 languages.

He has written other books about personal finance and investing in the real estate market but none of them have been as popular as Rich Dad Poor Dad. He founded an education company called Rich Global LLC to capitalize on the success of the brand but had to wind it down in 2011. While marketing his services, Kiyosaki, has been known to make unconventional statements.

In addition to his online courses, he is also on the editorial team of Paradigm Press, which is affiliated with Agora Financial.

Kiyosaki wants the middle class to protect its wealth by investing in assets that are mostly bought up by the rich if they are to benefit from the Fed’s monetary policy.

He has a five-step plan to achieve this:

Step 1: You should invest in cryptos

Many investment experts agree that cryptocurrencies are going to be a big deal in the future. Investors see them as a hedge and a nice way to diversify a portfolio in the face of uncertainty in the markets.

Kiyosaki says that the rich are buying up digital currencies and you should emulate them to keep up. He has a special report called The #1 Disruption Currency of the Future that outlines his approach.

If you prefer to invest in altcoins (cryptocurrencies that are not Bitcoin), he has a report on his favored picks called The Three Tiny Digital Currencies To Surge in 2020.

He wants you to invest in gold and he refers to it as “the #1 physical asset.” He wrote a special report about it called The #1 Physical Asset in the Power Position for 2020.

Besides gold, he encourages his audience to also look into silver. He has a special report about it called The Most Undervalued Asset of 2020.

Kiyosaki says that historically, mining stocks do well even when the economy is in turmoil. He has singled out one mining company that he expects to do well and written a report called The #1 Gold Stock for 2020.

He is a fan of dividend stocks and says that he has one company that has been paying dividends consistently for 25 years. He has written about it in a report called The #1 Crash-Proof Income Investment of 2020.

He wants you to sign up for his investment advisory service called The Rich Dad Poor Dad Letter.

When you become a member, he will send you all those reports for free and furnish you with more investment tips as well as video recordings from his three top advisors. The three advisors specialize in real estate, tax, and debt, and those videos are meant to help you get your finances in order.

The advisory service costs $49 per year and you have six months to try it out. This means that within the first six months of signing up, you can cancel your subscription and you will receive a full refund.

The presentation is legit.

Although Robert Kiyosaki has had his ups and downs, he is a credible voice in the finance industry. His finance book, Rich Dad Poor Dad, thrust him into the spotlight and since then, he has been considered an authoritative voice – his reputation has taken a few hits along the way though.

That being said, it is important to understand that his recommendations are not guaranteed to succeed. You can lose money investing in his stock picks and, therefore, it is worth examining them before you follow his advice.

Kiyosaki is no stranger to making bold claims that sound out of touch with reality but sometimes, he makes the right calls. In this presentation, he merely urges investors to prepare for a declining economy by diversifying into asset classes that are considered safe-haven types. It’s only that Kiyosaki packages his message as “the rich vs. the poor and the middle class” but if you look past it, he makes some decent proposals.