Have you encountered Ray Blanco’s presentation about “Apple Fi” The 5G Killer and are wondering what to make of it?

Ray goes against the grain with this one as he claims that rather than invest in 5G, you should look for alternative investments.

I sat through the presentation and examined his claims to establish whether there is substance to them. I wrote this review to present you with a summary of what he talks about and give my two cents on the topic.

“Apple Fi” The 5G Killer is a presentation by Ray Blanco whereby he touts his advisory service, Technology Profits Confidential, and urges you to stay away from 5G stocks. 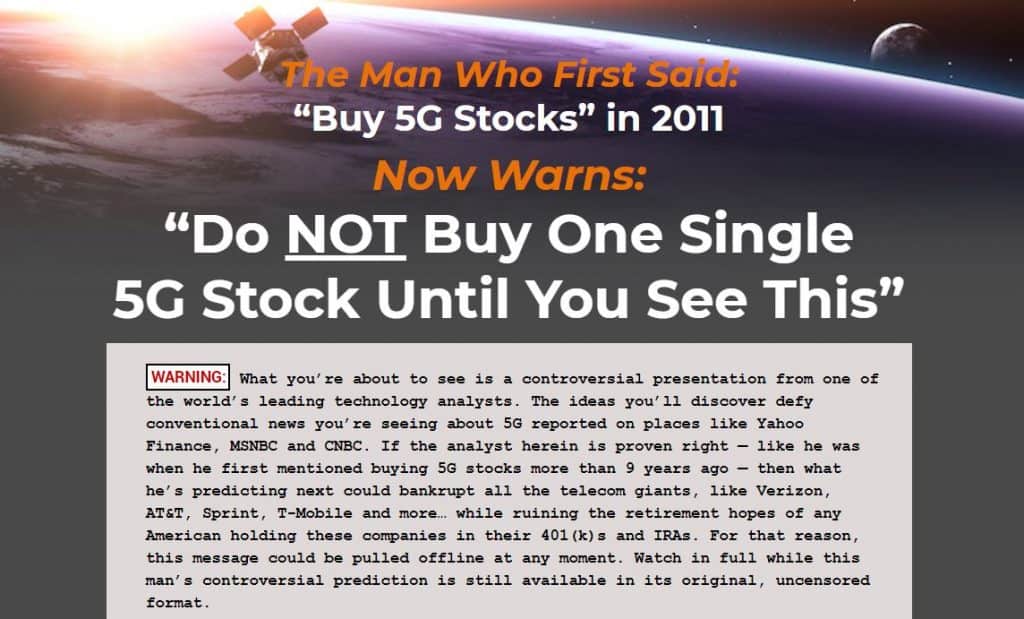 While many other investment analysts scramble to recommend the next best 5G stocks, as we have seen in my reviews of presentations like Trump’s #1 5G Stock and 5G Tollbooth Stock, Ray is recommending that we avoid them.

He claims to have talked about 5G stocks nine years ago while they were not on many people’s radars. He says that the investors who followed his advice have made a lot of money.

He thinks that now that many mainstream media and institutional investors are investing in 5G stocks, it is too late for the individual investor. All the money that was there to be made, has been made.

He has shifted his attention towards a new wireless technology that may render 5G obsolete. It is a new form of internet that he calls “Apple-Fi.”

According to Ray, “Apple-Fi” will be more popular than 5G because it will provide us with faster and safer internet and it will require less infrastructure.

Who is Ray Blanco?

His closed positions with the Technology Profits Confidential portfolio beat the S&P 500 index by 50%.

He specializes in tracking down technological breakthroughs to give his followers a leg up on other investors. He enables them to get in on new investment opportunities before they take off and become huge.

How does “Apple Fi” The 5G Killer work?

“Apple-Fi” is a special kind of internet connection that will use low earth orbiting satellites to beam fast internet to devices directly.

Apple intends to launch thousands of these satellites to provide its customers with fast internet.

In doing so, it will bypass traditional internet service providers like AT&T, T-Mobile, Sprint, and Verizon. Ray believes that those companies will see their revenue streams take a major hit should it become a reality.

The new internet will be cheaper than the usual internet plans that those companies provide and it will not require routers and cell towers.

Ray provides the following points as evidence that the project is underway:

Apple is due to hold a conference on June 22 and that’s when Ray thinks they will announce their plans. Ray wants you to start investing before then because the opportunity is still novel.

How to invest in “Apple Fi” The 5G Killer

Instead of investing directly in Apple shares, Ray thinks you should invest in the small tech companies working with Apple on the project.

He believes going that route will be more productive because Apple is not likely to witness growth at the level of those smaller companies when it launches “Apple-Fi.” These companies will supply the antennas in Apple devices and the microchips in the satellites.

He has identified two companies as good investment candidates:

A $3 billion company based in California that makes rocket engines. Some of its engines have been used by Boeing and NASA. Due to its involvement in the “Apple-Fi” project, its revenue will increase exponentially and its share price will follow suit.

A $500 million company that will maintain the satellites while they are in orbit. A contract with Apple will do wonders for its share price.

He has written about these two companies in a report titled Apple’s Greatest Breakthrough Yet: Retire Rich On The “Apple-Fi” Revolution.

If you would like to get the report, you have to subscribe to Technology Profits Confidential. Annual membership costs anywhere between $49 and $129 depending on the subscription plan you choose.

It also comes with a 6-month money-back guarantee.

In addition to the Apple-Fi report, you also get two extra reports for free:

I think that “Apple Fi” The 5G Killer is legit.

Bloomberg published an article in December 2019 revealing the scope of Apple’s project. The article revealed that Apple has been hiring a team of engineers to work on the project. This proves that Ray’s presentation is legit.

Although the presentation focuses on Apple’s efforts to provide satellite-based internet, other tech companies also have plans to do the same. Amazon, Facebook, and SpaceX have similar plans to launch Low Earth Orbiting (LEO) satellites to provide cheap and fast internet to their users.

My Final Word on “Apple Fi” The 5G Killer

Ray Blanco says that he started talking about 5G nine years ago and that investing in 5G stocks now is late. In this presentation, he wants his readers to move past 5G and focus on “Apple-Fi”.

He says that, in the long run, it could prove to be more lucrative than the iPhone, which has been a tremendous success for the company. It will be interesting to see how that pans out.

As for “Apple-Fi” dislodging 5G as the go-to network, you should take that with a grain of salt because LEO satellite internet has not been proven to be profitable, even by those other companies with similar projects.

As an avid follower of Apple’s R&D programs will tell you, the company often shies away from projects where there isn’t a clear path to profitability.

The saving grace is that Apple is obsessive about doing as much of its production and service-delivery in-house. Therefore, this internet project fits the bill as it would cut out the middle-man (ISPs) and mean that the internet will now be provided in-house.