Casey Research’s Nick Giambruno claims to have identified a group of companies he calls “Covert-23” (a clever call back to Covid-19 if you see it).

He thinks that this group of stocks are a scourge to the financial system and that they may spark a “financial pandemic” that will affect the markets tangibly.

This phenomenon is what we’ll be tackling here today and by the end of this article, you should have a clear picture of what Nick talking about and asking of you.

What is Casey Research’s Covert-23?

I decided to go with Casey Research’s Covert-23 as the title of the presentation because it encapsulates what Nick is trying to discuss in it. 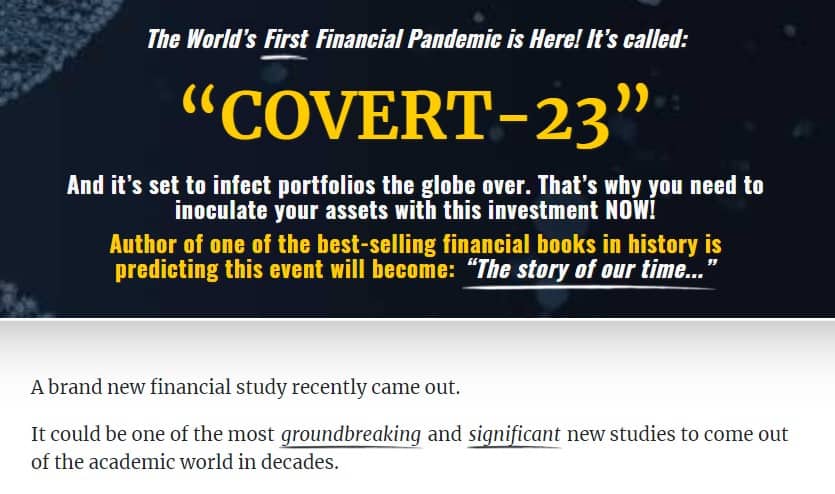 The discussion centers on a group of 23 firms that have almost total control of the global economy. Nick says that after a group of researchers did a study of over 37 million companies, and 43 multinational firms, they created a web of ownership between them. Using mathematical models, they arrived at 147 “super-corporations” that control the global economy. These 147 entities then led to 23 firms – mostly banks – that control half of the money on the planet.

He decided to label them “The COVERT-23.” He named four of them and they are JPMorgan Chase, Bank of America, State Street Corporation, and Shell.

He says that they have high jacked the global economy and own massive stakes of the biggest companies in the world. Some of the companies on their portfolios include the FAANG companies, Disney, eBay, Airbnb, Uber, and many other big companies.

He blames the “covert-23” for the inequality gap, the polarization of politics, and recent financial crises, most notably the Global Financial Crisis of 2008.

Nick says that they have a way of messing up the economy whereby they exploit any speculative bubble by selling assets they know are useless. They then hoard large sums of money from gullible investors and when the bubble bursts, they come in and lend money to the victims with interest.

Nick says that this group of 23 came about due to three enabling policy decisions:

Nick says that the 23 companies also have large derivatives portfolios and, compounded by the stock buybacks and the borrowing, he sees the market unraveling and a financial crisis of historic proportions on the horizon.

He wrote a report explaining how everything will pan out. It is titled Your “COVERT-23” Inoculation Program: How to Survive the Coming Collapse of Western Civilization. Inside it is a list of the 23 super-stocks and explanations of how they each ended up here.

Nick also names the investments you should purge from your portfolio, three money moves you should make, three “shake-out” winners, and the tech trade of the decade.

To get your copy of the report, you have to sign up for The Casey Report, a newsletter that he and Doug Casey publish every month.

Who is Nick Giambruno?

Nick Giambruno is an investment guru who works for Casey Research. He is the senior analyst of the firm’s flagship investment newsletter, The Casey Report. He collaborates with Doug Casey, the founder of the company.

Nick has been busy over the past couple of weeks, releasing presentations like The #1 Lateral IPO of 2021 and The Switch to promote the newsletter.

He is a big fan of investing during a market crash and refers to it as “buying when there’s blood on the streets.” The rationale behind this is that you get the best prices for assets when they are down in the gutter. We’ve seen him perpetuating this approach in most of his presentations.

What do you get when you join The Casey Report?

As I’ve mentioned above, the first thing you get as a subscriber of The Casey Report is a free copy of the report about Covert-23. In addition to that, you receive two other reports:

I think Casey Research’s Covert-23 is a legitimate presentation.

Nick Giambruno is an investment guru and it helps that he works for Doug Casey, who is well known in the newsletter circles. In the presentation, Nick predicts that there is a looming financial crisis during which the market will lose value and investors will have to hedge their holdings.

Whether you agree with him or not, there is nothing illegitimate about him airing his views. However, you must not take his words seriously without examining them because as convincing as he sounds, the market may prove him wrong.

You get to learn about Nick’s investment strategy and predictions.

The presentation is too wordy. Although Nick has a lot to get off his chest, there’s just too much to cover sometimes due to repetition.

Nick Giambruno believes that the world is being run by a cabal of 23 entities (mostly banks) that control half of the money supply and manipulate the market at will and with impunity. However, he says that they are the masters of their downfall because the model they live off of is unsustainable.

Unfortunately, as they fall, they will bring the economy down with them and the best way to avoid financial ruin is to prepare yourself and act accordingly. Nick says that the first part of that plan is to get rid of all the investments those 23 entities control and then hedging your portfolio with gold and Bitcoin.

Concerning gold, Nick expects a “meteoric rise” once the price starts to reflect its true fundamentals. If you’ve followed Giambruno for as long as I have, he has been urging his subscribers to buy gold for as long as I can remember (even before the pandemic). After the pandemic happened, Gold prices went through the roof and set new records thus vindicating his predictions.

Now he expects the gold bull market to carry on in earnest thus setting even more insurmountable records.

It is hard to tell whether he is right about the gold, Bitcoin, or even the financial crisis. Therefore, take his words with a grain of salt and if you decide to subscribe to his service, don’t follow his advice without doing research first.