Louis Navellier and Eric Fry, who both work for InvestorPlace, recently announced that they will be co-hosting the Technochasm Summit.

It will be based on Eric’s highly successful “technochasm” video that he shot earlier this year and they will be talking about investing in the technology sector.

In this review, we will be looking ahead at what we can expect from the event as well as how you can attend it as it happens.

What is the Technochasm Summit?

The Technochasm Summit is an event that will feature Eric Fry and Louis Navellier. It will be published by InvestorPlace. 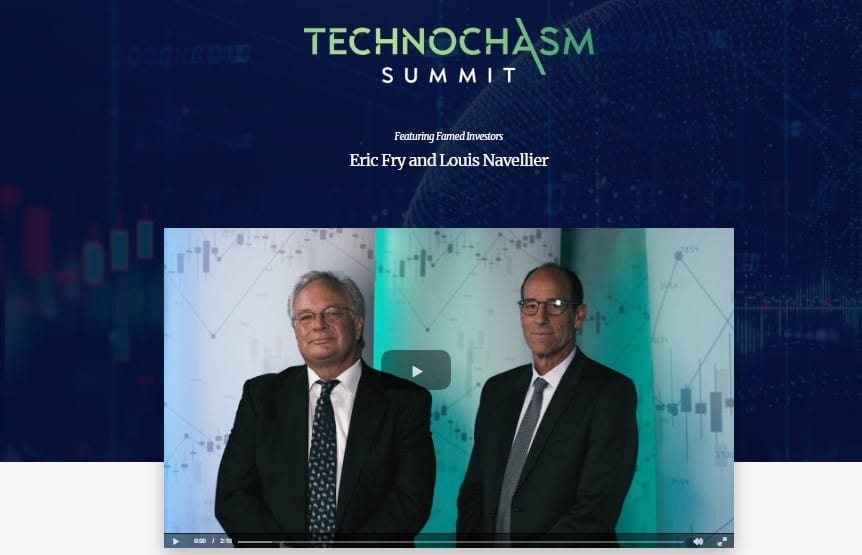 InvestorPlace is an independent firm that publishes financial research by a variety of experts who are part of the editorial team.

You can attend the event free of charge as it happens, and the good thing is that you don’t need to be a subscriber of either one of Eric’s or Navellier’s services.

This summit will be a follow-up to a popular video by Eric Fry called Technochasm that he published in February. It got more than 11 million views.

What was fascinating about the video?

Eric discussed the division between rich people and the poor concerning their personal lives, their businesses, and their levels of investment. As he was talking about the poor, he gave them tips to enable them to bridge the wealth gap.

Therefore, you can expect some of that or a variation of it to feature at the summit.

When you provide your email as you sign up for the webinar, you will receive a free copy of a book called Silicon Valley Super Cycle. It discusses investing in the tech industry and reveals the life cycle of all new startups and technological advancements.

By providing your phone number, you can sign up for the VIP Reminder Service. This service is all about receiving text message reminders in the lead up to the event.

Who are behind the Technochasm Summit?

The event will feature Louis Navellier and Eric Fry, both of whom work for InvestorPlace.

Eric won the Portfolios with Purpose competition in 2016 where he competed against 650 other money managers. He recorded a 12-month return of 150%.

Eric has had a good record of going short in the market. For example, in the aftermath of the Dot Com bubble, he shorted many tech stocks that plummeted into bankruptcy. He also predicted that the housing market would falter in 2005 and acted accordingly.

He has been featured in the Wall Street Journal, Time, Barron’s, and many other financial publications.

Louis Navellier is a growth investor who’s advised thousands of investors in the over three decades that he has been active in the finance sector. He has cultivated a reputation of being a good portfolio manager and a savvy stock picker.

Louis seeks to uncover inconsistencies in the market that can help investors to beat the market without exposing themselves to high risks. All this while investing in growth stocks.

He has been quoted by The New York Times, The Wall Street Journal, Bloomberg, and MarketWatch.

What will be covered at the Technochasm Summit?

As mentioned earlier, this webinar is a continuation of the Technochasm video that Eric put out earlier in the year. In it, he introduced his viewers to the concept of the “technochasm.”

At the summit, he and Navellier will delve into it. They will talk about how a small group of people is amassing fortunes and explain why some companies are doing well while others are going bankrupt.

They will highlight the biggest winners and losers of the technochasm phenomenon and explain why investing in the winners will turn small investments into a large sum in a few months.

They will also identify the number one stock to own (the one they anticipate to become the biggest winner) and from what they’ve hinted at, it is a small company.

The email address you use as you register will be receiving emails periodically from InvestorPlace advertising other services they offer.

The Technochasm Summit is legit.

It will be hosted by two credible investment gurus (Louis Navellier and Eric Fry) who have decades of experience between them. They have each been featured by notable financial publications and they have appeared on TV shows as commentators.

InvestorPlace is also a legitimate firm that has published dozens of newsletters that offer financial advice to retail investors.

My Final Word on Technochasm Summit

Eric Fry and Louis Navellier intend to reveal a technology that will be influential to the stock market and the economy. They tout it as a big investment opportunity that we cannot afford to miss out on.

They don’t reveal much about it but from what they have shared, it is in the technology sector (even the word “technochasm” hints at it). They will inform us how they want us to take advantage of those investment opportunities.

If you cannot attend the event as it happens, you can always wait for the recorded version which they’ll also distribute for free. You can also expect them to advertise one or more advisory services while at it.