I recently stumbled across a presentation by Eric Fry with the heading “The Secret Behind the Coming 50X Gold Bull Market.”

From the off, I could tell that Eric has become the latest of investment gurus who believe that gold is going to be the go-to investment for the foreseeable future.

So far, in 2020, it has already broken its previous price record and he expects it to surge even higher.

In this review, I will walk you through Eric’s presentation highlighting the key points.

What is the 50X Gold Bull Market?

The coronavirus pandemic has caused an economic fallout and volatility in the markets that have led many investors to be extra-cautious with their investments. A majority have hedged their portfolios by investing in gold. 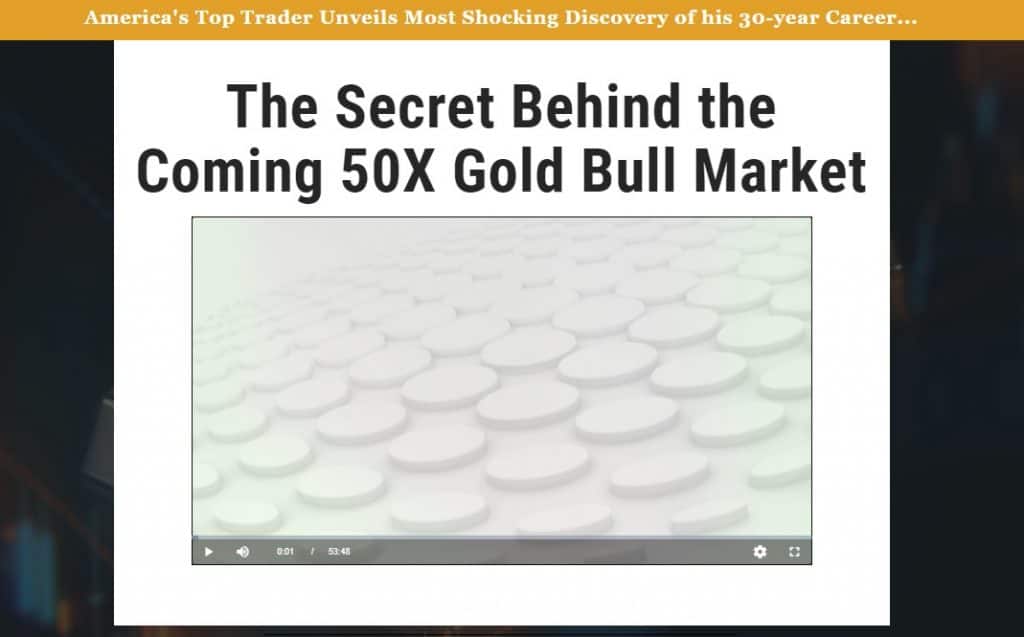 Gold has historically been used as a store of value and a hedge against unpredictability in the market. Unsurprisingly, it has had a very fruitful year.

Eric Fry predicts that we will witness a gold bull market like never before. He says that the situation we are in reminds him of how things were in the early 2000s before gold went on a tear.

He even mentions that the price could go up as high as $10,000 per ounce “in the short term.” He doesn’t specify what that means but goes on to say that the price could rise even higher after hitting $10,000 (for context, the record it broke was slightly below $2,000, so it has a long way to go).

To back up his prediction, Eric cites two key factors:

About the declining dollar, Eric points his finger at the stimulus packages that governments have been conjuring “out of thin air” to prop up a floundering economy.

Though these reliefs are needed desperately by families that have lost their livelihoods and businesses that are on the blink of collapse, they are inflationary. And with trillions of dollars of debt added to the deficit, he thinks that inflation will be inevitable.

At the same time, the price of gold will go up, something he says has been going on since the gold standard was done away with in 1971. He estimates that since then, the dollar has lost up to 95% of its value relative to gold. Of course, gold rises faster during periods of economic distress, such as what we are seeing in 2020.

With many bonds around the world “paying” a negative yield, he thinks the signs are ominous.

Who is Eric Fry?

Eric Fry is on the editorial team of InvestorPlace, an independent firm that publishes financial advice predominantly targeting retail investors.

Eric joined the finance industry 25 years ago when he started editing newsletters and has since been advising investors on the best ways to profit from some of the largest economic shifts. For instance, he claims to have directed his subscribers to invest in gold before it soared in the early 2000s.

He also urged his followers to short big bank stocks and mortgage companies before the Subprime Mortgage Crisis happened in 2008.

How to make money during the 50X Gold Bull Market

Although Eric is recommending that you invest in gold, he is not keen on coins, ETFs, bullion, or mining stocks like Adam O’Dell did in his “A9 Gold Stocks” presentation.

He wants you to invest in Royalty Rights on gold mines that he says you can buy and sell in public stock exchanges like stocks.

He prefers them to what you’d call conventional forms of investment because he believes they provide you with better security (lower risk). But he insists that you have to buy them before their value appreciates.

He has found one royalty right investment belonging to a small company that, as he was releasing the presentation, was trading for $5; he expects it to multiply its value 50 times if the gold bull market becomes a reality.

He has written a report titled Three Ways to Play the 50X Gold Bull revealing the name of the company as well as two other investment opportunities.

If you want to receive a copy of the report, you have to subscribe to his newsletter, Fry’s Investment Report.

The newsletter focuses on opportunities brought about by the biggest trends as per Eric’s definition.

Should you sign up for it, you will receive monthly newsletters, Eric’s model portfolio, urgent alerts, and a free copy of his book, Bear Market 2020: The Survival Blueprint.

How much is the subscription fee?

An annual subscription to Fry’s Investment Report costs anywhere between $49 and $199 depending on the type of subscription you choose.

There is a 90-day grace period during which they will refund your money if you cancel it.

I think Eric’s presentation about The Secret Behind the Coming 50X Gold Bull Market is legit.

Mr. Fry is in the right when he says that gold is likely to benefit from the economic fallout brought about by the pandemic. So far, a large number of investors have diversified into the precious metal driving its price to record levels.

However, his predictions about gold are unproven and those price projections remain to be seen.

Although it may be tempting to dismiss his prediction, you should not forget that he is merely giving his opinion. Therefore, I think his presentation is legitimate.

The Secret Behind the Coming 50X Gold Bull Market is a teaser by Eric Fry that is dominated by talks of an impending gold bull market. Eric sees the flooding of the economy with stimulus money as likely to cause inflation and a depreciating dollar. To him and other gold speculators, the stage is set for a record-breaking bull run that could see gold rise to $10,000 per ounce.

To be fair to him, gold is usually the go-to investment when the economy is in recession, which has been vindicated by the superb run gold has had so far (including breaking its price record).

If you want to get more insights from Eric, you have to subscribe to his newsletter, Eric Fry’s Investment Report. You can become a member for $49.