Looking for a review of George Gilder Prediction 2020?

I recently received an email from George promoting the presentation so I decided to take a closer look.

Can we trust his bold claims and follow his advice looking ahead?

I went through the presentation to find out more and put together this review discussing its merits.

Read on to get all the info.

What is George Gilder Prediction 2020?

“George Gilder Prediction 2020” is a pitch by George Gilder where he talks about investment opportunities in 2020. It is titled, “Get Ready For The $16.8 Trillion ‘REBOOT’ Of 2020 And Beyond”.

He also uses it to advertise his new investment research advisory, The George Gilder Report.

Although this was my first time encountering George’s work I have done reviews of other financial analysts predicting how the year 2020 will unravel.

But as always with this kind of presentation, it is more important to know whether it is legit and whether you can trust the person making it. That’s why I’m writing this review. 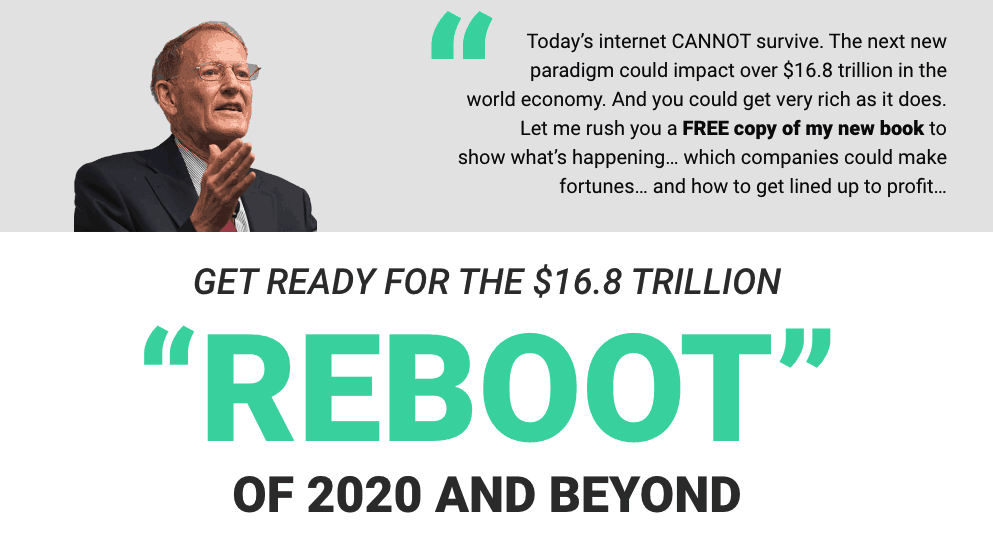 George Gilder’s prediction for 2020 has to do with a concept known as “the Cryptocosm.” It is a term that he coined to refer to a network of entities that are going to be ubiquitous in our lives.

They will be built on the principles of decentralization and enhanced security; think of blockchain and what makes it appealing.

The companies that will be formed based on the Cryptocosm will replace our current companies that were never built with security and decentralization as their core elements.

This means that companies like Google, Amazon, and Facebook will be dethroned by new companies because these tech behemoths are driven by big data with less emphasis on security.

George says that poor security features explain the numerous hacks and data breaches modern companies have had to deal with.

He says that the tech companies we have today are optimized to openly share information “like a giant encyclopedia.”

Companies built on the cryptocosm will dominate the market and be the proponents of technologies like self-driving cars, artificial intelligence, and IoT. It will be like a “global reboot.”

He covers this concept in detail in his seminal book, Life After Google.

Who is George Gilder?

George Gilder is a career investor and author who’s been active in the finance industry for the better part of the past 40 years. Note that he stepped away from the public eye in 2007, but has decided to make a comeback.

Throughout his career, he has been fascinated by new technological trends and has been known to urge his readers to invest in the ones that promise to make it big.

For example, in 1982, when he met President Reagan and talked to him about microcomputer chips explaining how important they were going to become to the world, he left such an impression on the president that he urged members of his cabinet to read George’s book, Wealth and Poverty.

George’s propensity to be ahead of the tech curve is demonstrated by him predicting the age of the smartphone in 1994 through his book Life After Television. Life After Google is modeled along those lines.

How does George Gilder Prediction 2020 Work?

While all that sounds fascinating to tech geeks, what does it mean to you as an investor? Well, George believes that backing the companies that are based on his new model will be pivotal to your success in the market.

He says that he has scoured the markets and found the companies that match that description.

He doesn’t reveal them in the presentation and doesn’t go into how he picks them. However, he says that reading his book Life After Google will go a long way into explaining how you can do that.

He is willing to send you a copy of his book without charging you a cent (shipping included) if you subscribe to his newsletter, The George Gilder Report.

It is a new service he created after coming from the “early retirement” he had subjected himself to in 2007. This is the first time he is coming forward with this information since 2007 and he wants you to gain access to his insights.

Here is what you get when you sign up for his newsletter:

He also sends you the following reports for free when you subscribe to The George Gilder Report:

There are three ways in which you can subscribe to George’s newsletter:

You have 90 days to try the newsletter and determine whether you will cancel your subscription and receive a refund of your membership fee. You get to keep all the materials you receive in the course of your subscription.

To understand whether his claims are authentic, you only need to gauge how people have responded to his book, Life After Google, and it has been overwhelmingly positive

The book has even been featured on Forbes and The Wall Street Journal. George has even been interviewed by Fox News to discuss it and the Financial Times even named it the book of the Month.

George Gilder Prediction 2020 is based on his experience in the world of investments and particularly, with regards to tech stocks.

George has studied the tech industry for over forty years and during that time, he has learned how it works and how new trends materialize.

He demonstrated that when he predicted that smartphones would take a center stage back in 1994 in his book, Life After Television, and he was proven right.

Life after Google follows in the steps of his other tech predictions and it will be interesting to see whether he is right about established companies being overtaken by new ones. Whether this happens, paying attention to his say on the direction of tech in 2020 is imperative if you are serious about investing in the tech industry in the foreseeable future.

What Is George Gilder Prediction 2020?

George Gilder Prediction 2020 is a pitch by George Gilder where he talks about investment opportunities in 2020 and refers to it as the $16.8 trillion reboot.

Who Is George Gilder?

George Gilder is a career investor and author who’s been active in the finance industry for the better part of the past 40 years. George has made predictions such as the smart phone in 1994 and others. He is also the author of several books such as Wealth and Poverty and Life After Television.

The $16.8 trillion reboot is a prediction from George Gilder about how the internet cannot survive. He says that the next paradigm could impact over $16.8 trillion in the world economy.

What is George Gilder Predicting?

George Gilder is predicting that in 2020 the internet as we know it will not survive. He shares his entire prediction in his advisory research service, The George Gilder Report.