Have you come across a presentation by Jason Stutman with the heading “New 5G Technology Will Soon be Available to Every American Household”?

Considering that many investment gurus have done pitches for what they consider the best 5G investments, is Stutman’s version of it groundbreaking enough to be worth looking at?

Well, that’s what I intend to address in this review. In it, I will provide you with an overview of the presentation so that you don’t have to sit through it. I will also give my two cents on it and reveal the three companies he thinks you should invest in.

What is New 5G Technology?

When Jason released “New 5G technology will soon be available to every American Household,” it served two purposes. First, it was an advert for his advisory service, Technology and Profit, and second, he teased three companies that could make for good 5G investments. 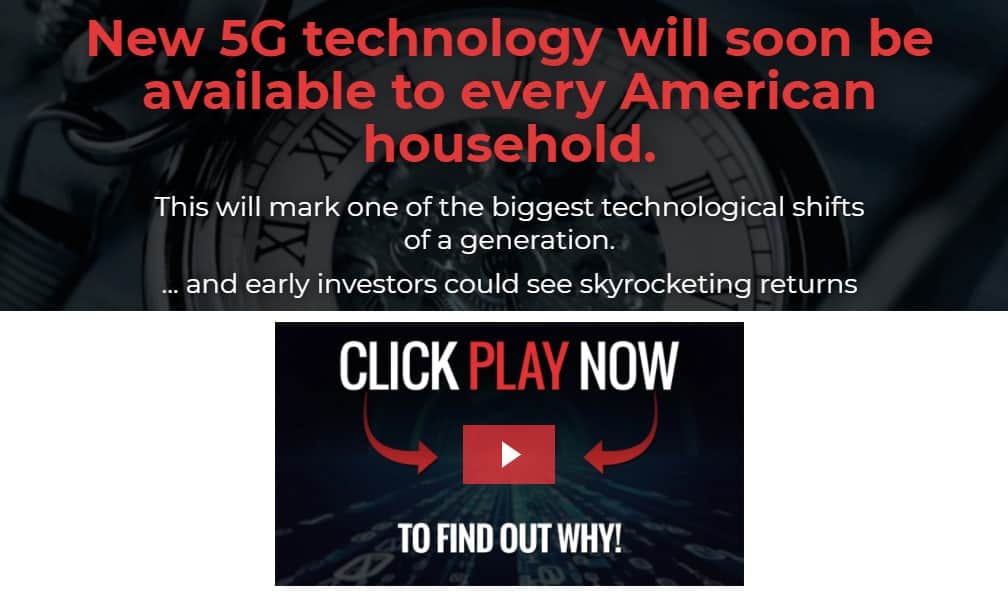 After going through the presentation, I could tell that Jason sees 5G as an important step towards the actualization of various tech developments. He thinks it will unlock IoT, autonomous cars, and a host of other trends.

This opinion is shared with other gurus as we’ve seen before with presentations like The Untold Truth About 5G (Matt McCall) and Trump’s “5G Profit Promise” (Robert William) echoing that message.

Stutman states that the 5G buildout will mark the end of the broadband cable. As he puts it, 5G will serve as the greatest technological shift we have ever seen.

He correctly points out that 5G will provide us with faster internet speeds than 4G before moving on to the investment opportunities that the network upgrade will create.

To add weight to his argument, he walks us through how previous network upgrades (1G to 2G, 2G to 3G, and 3G to 4G) were a boon for some companies and how investors who got in on those companies before they took off made a ton of money.

He has identified three companies that he sees following that trend – benefiting from their involvement in 5G.

Jason wrote a report titled Ultranet Profits: Top 3 Stocks for Riding the 5G Revolution in which he profiles the three companies he wants his subscribers to invest in.

He is sending out free copies of the report to people who subscribe to his newsletter, Technology and Profit. I will get more into that later.

For your benefit, I was able to determine the names of the three companies going by the clues that he provided and I will reveal them here:

His first pick is a company that installs 5G antennas and has invested $1.05 billion to upgrade its networks to prepare for the 5G rollout.

Its vice president was quoted saying “There’s a lot more to 5G than just a smartphone going, you know, a little bit faster on the network. So this next generation technology will be frankly one of the biggest leaps forward that I think we will see…”

I found out that the company Jason was talking about was Verizon (VZ) because its Vice President, Nicki Palmer made that statement word for word in a podcast while she was talking about the fifth generation of wireless technology.

The second pick is a company that manufactures wireless equipment for big telecommunication companies. It has worked with a wide range of clients, including deals worth $100 million with top tier Indian telecom companies.

Its name is Ceragon Networks Ltd. (CRNT). I picked up on that because a 2017 article on its website indicated that it had done $100 worth of business with Indian telecom operators.

The final company manufactures some parts of 5G antennas. It has partnered with carmakers, weapons manufacturers, and was even a supplier of microchips to Apple.

There are more clues in the presentation but we don’t have to list them all here.

This one is Skyworks (SWKS).

Who is Jason Stutman?

Jason Stutman is an investment guru who works for Angel Publishing. He joined the firm in 2013 and has since been editing an advisory service called Technology and Opportunity.

His bio on the website indicates that since he started working for Angel Publishing, his model portfolio has outperformed the broader market but unfortunately, it doesn’t indicate what benchmarks he was using.

Jason’s trading strategy entails building a portfolio filled with disruptive companies that are innovating their competition out of business. He identifies impactful tech trends and buys and sells stocks based on how they are positioned within that.

He was behind Project Greenlight.

What you get when you subscribe to Technology and Profit

In addition to receiving the free report (Ultranet Profits: Top 3 Stocks for Riding the 5G Revolution), by subscribing to Technology and Profit, you will also receive:

The Technology and Profit subscription fee

The newsletter has a 30-day, money-back guarantee.

Jason is an expert at analyzing tech stocks that are fit for investment. He has been doing it for the past few years and claims to have beaten the broader market for the past seven. In the presentation, he touts three companies that he expects to soar due to their involvement in the 5G rollout.

He is not guaranteeing that they will be major hits in the next few years but states that they may end up being worthwhile picks. If you are to invest in them, since I have already shared their names, only invest money that you wouldn’t mind losing.

5G investments have been very popular with investment gurus over the past two years. We have seen numerous approaches to the subject and an array of companies (big and small) presented to us as the “best way to invest in the upcoming trends.”

In this presentation, Jason Stutman is recommending Verizon (VZ), Ceragon Networks Ltd. (CRNT), and Skyworks (SWKS). He may change his opinion and find other companies but his approach, if you sign up for his newsletter, is to invest in disruptors.

I am not sure how those companies fit that profile but they are heavily involved in the 5G buildout, which seems to have been the key factor in picking them.