I recently came across a presentation by James Altucher with a header that read “Jeff Bezos’ Big Bet.”

It caught my eye because James claims that people who missed out on Amazon’s growth from startup to tech giant can make a killing with Jeff Bezos’ next project (the big bet). He says that they may nab gains of up to 10X in the long term.

This article will give you an overview of the presentation if you haven’t had the time to go through it. I highlight the key points and reveal why James published them.

What is Jeff Bezos Big Bet?

As already mentioned, Jeff Bezos Big Bet is the title of a presentation by James Altucher. It is based on a prediction by Altucher that Amazon Inc. is set to unveil a massive global innovation that will boost its business. 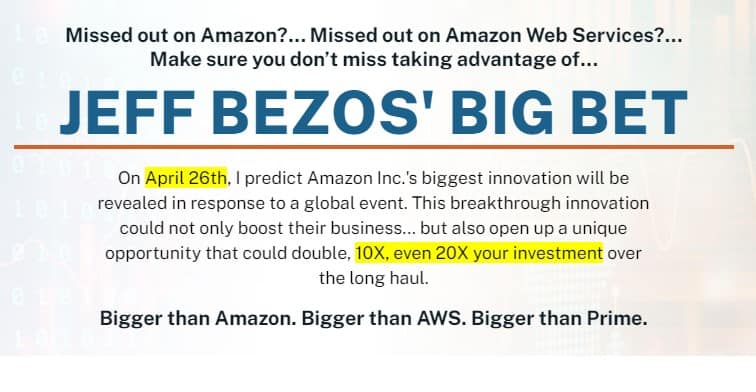 He says that investors who smell the bacon early and take action could 10X or even 20X their investments. Altucher even speculates that the innovation could be bigger than Amazon’s eCommerce business, Amazon Prime, and the market-leading Amazon Web Services.

He is referring to Amazon’s plans to launch a constellation of internet satellites. He calls it “Star Universal Internet” or just “StarNet.”

When Amazon launches its constellation of low-earth orbiting satellites, the satellites will beam super-fast internet to people on Earth directly without requiring antennas and cables. It is often considered the ultimate solution to the problem of universal internet connectivity because satellites can hover above locations where installing masts is not viable. Think of deserts, oceans, and mountains.

Amazon is not the only company that is working on such a project. It joins Facebook, OneWeb, and SpaceX who are each at different stages of developing their versions of satellite internet services.

Ray Blanco (an investment guru who works for Agora Financial) even sounded off on Apple possibly entering the fray when he released a presentation called Apple-Fi.

Altucher says that Amazon’s project may be underway because the company has leased two buildings and started hiring engineers. It has also applied for a patent for its proprietary energy-saving launch system.

How to invest in Jeff Bezos’ Big Bet

Instead of telling you to buy Amazon shares, James insists that you focus on the smaller companies that will be involved in the project. He rationalizes this by saying that investing in a small company offers potentially higher returns because a company like Amazon is too big to rise significantly in the short term.

Meanwhile, a smaller company can rise sharply in a shorter period. To this end, Altucher has identified two tiny stocks that he expects to ride Amazon’s coattails and benefit massively from “StarNet.”

The first pick is a small manufacturing company based in California that recently went public and doubled its value in fewer than 100 days. He says that it solves one of the biggest issues companies like Amazon face when launching satellites: It makes “radiation-hardened” electronic components that can survive the harsh conditions in outer space. He says that it may win the Amazon contract because it has worked with Amazon before – it provides high-end security to Amazon Web Services. It has supplied Boeing, Airbus, and the US government with components and systems before.

The second pick removes space debris to avoid collisions with active satellites. Space debris is a serious problem for space missions and the firm offers an invaluable service to stakeholders. It has a robotic arm that will pull dead satellites from orbit. It has an annual revenue of a little less than $2 billion.

Altucher doesn’t mention a direct connection with Amazon but you can safely assume that it will get more work when Amazon starts putting satellites in orbit.

James prepared a report called Jeff Bezos’ Big Bet: Retire Rich on StarNet’s Universal Internet Revolution that he wants to give away for free to people who join Altucher’s Investment Network.

Who is James Altucher?

Now that we know what he is up to, what are his credentials?

James Altucher is an entrepreneur and angel investor. He is also an author who is best known for his bestselling title, Choose Yourself! It is a book on self-improvement that urges its readers to tackle tough economic situations by utilizing new tools and economic forces.

The book has been so successful and earned James so much recognition that he decided to build his brand around it. For example, he wrote a book called The Choose Yourself Guide to Wealth.

Altucher is a serial entrepreneur having started 20 online-based companies. He says that only three of them have survived and that he has learned valuable lessons from his experience.

He has a podcast that has been downloaded over 40 million times.

What do you get when you join Altucher’s Investment Network?

Altucher’s Investment Network is a newsletter that is edited by James Altucher and published by Three Founders Publishing. It is built on a James revealing undervalued, little-known investments that are not often talked about on Wall Street.

To unearth those companies, he says that it takes a lot of research and sifting through thousands of annual reports and balance sheets, and sometimes traveling to foreign countries.

When you sign up for Altucher’s Investment Network, the first thing you get is a free copy of the report about those two tiny companies. It is titled Jeff Bezos’ Big Bet: Retire Rich on StarNet’s Universal Internet Revolution.

He also sends you two other reports for free. They are each about an investment opportunity in the space exploration industry.

The first one, Lunar Mining – An Exclusive Guide To Exploiting a Quadrillion-Dollar Opportunity, concerns a project to mine the Moon’s topsoil.

The second one, The Advantage of Micro Gravity: A $1 Trillion Investing Strategy That’s Truly Out of This World, involves “space manufacturing” and the opportunities that this creates.

In addition to the free reports, you get:

It is legit because Amazon is working on a project to launch a constellation of LEO internet satellites. Jeff Bezos has also been investing a lot of money into his Space exploration company, Blue Origin, and he intends to use it to launch his satellites.

Although the premise of the presentation is legit, take Altucher’s predictions with a grain of salt because his past successes do not guarantee that he is right about this.

Altucher released the presentation mainly to pitch his investment advisory service (Altucher’s Investment Network) to prospective subscribers. To entice them, he teases two small companies that may benefit from Amazon’s internet satellite project (with the promise of similar recommendations if you join the newsletter).

Amazon’s plan echoes similar projects by SpaceX and OneWeb to launch multiple satellites that will beam the internet directly to devices on Earth. If you are enthralled by the prospect of gains, note that although such ambitious projects have the potential to pay off massively down the line, we are a few years away from realizing their full implementation. This is uncharted territory and you should be excited but cautious.