Jeff Brown, who’s known for his predictions in the tech and biotech sectors, did a presentation about “America’s Last Digital Leap.”

The idea behind it is that there is an industry worth $11.9 trillion that is about to undergo fundamental changes that will inevitably create investment opportunities.

When you are done reading this article, you should have an idea of what Jeff is talking about as well as know the name of the company he is teasing.

The header of the article reads Pandemic Unleashes America’s Last Digital Leap and it is about an $11.9 trillion industry being digitized partly because of the pandemic. 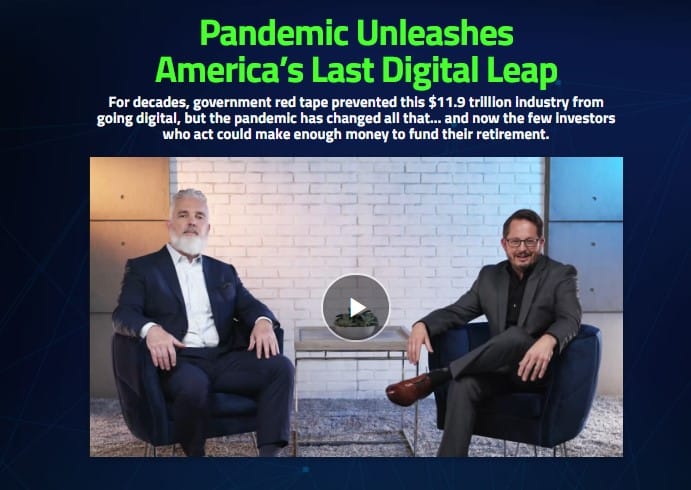 The $11.9 trillion industry Jeff is talking about here is the healthcare industry, which he believes is about to go digital.

In the presentation, the point he wants to put across is that when an industry is digitized, companies that are well-tuned to the changes go up exponentially. He says that industries like movie shops, music, education, auto dealers, and travel have each undergone digital leaps that revolutionized how they operated.

Since healthcare is a big industry that impacts over 3.8 billion people directly, he expects its digitization to cause a bigger splash than the others. I should clarify that the $11.9 figure he keeps throwing around is the projected value of the industry in the next couple of years.

What does being “digitized” mean for the healthcare industry according to Jeff?

Contrary to what most people would think he means, it is not about digitizing medical records, the introduction of robots, or telemedicine. Instead, it is about the adoption of gene-editing technology as a form of treatment.

By adopting gene-editing technology, Jeff says that doctors will now easily cure more than 6,000 known genetic diseases that initially had no effective cure and that includes cancer. He says that the technology is effective against any disease caused by genetic mutations and it will allow doctors to develop tailor-made solutions for every patient. He calls this “precision medicine.”

Jeff says that the government was slow to adopt gene-editing because of bureaucracy. That was before the coronavirus pandemic, which he says forced the government’s hand when the president declared a national state of emergency. What followed was the elimination of much of the needless red tape that was holding things up.

This isn’t the first time that Jeff is talking about gene editing as we have already seen him tease a biotech company that also deals with gene-editing in a presentation called The Tech Melt (The Second Wave).

How to invest during America’s Last Digital Leap

Jeff tells us that the healthcare industry has benefited from massive investments by tech companies like Apple, Microsoft, Amazon, and Google and individuals like Jeff Bezos and Warren Buffett.

When it comes to investing, he has his sights set on a tiny company that is “in the middle of it all.” He says that normally only venture capitalists would be aware of the opportunity but this time, he is also letting us in on the action. He tells us to act fast because the company “is set to make a key announcement as early as tomorrow” and once it publishes a press release, we will be left out because the shares could be trading much higher.

What’s so special about the tiny company that has got Jeff this excited?

It has developed a new technique for gene editing that allows doctors to fix genetic “typos” outside the body. It is developing a drug that may hit the market any time now because, in the pitch, we learn that it was preparing an Investigational New Drug (IND) application.

Jeff says that an IND is a big deal because when a biotech company applies for one, they are about to move into human testing.

A biotech company that fits the description is Kronos Bio Inc. (KRON). It is based in California and its job is to develop novel cancer therapeutics with a focus on genetics. In December 2020, it announced that it had FDA clearance for an IND application.

Jeff even wrote a report called How to 10X Your Money in America’s Last Digital Leap in which he reveals the name of the company he is teasing. He intends to give free copies of it to members of Exponential Tech Investor.

Jeff Brown is a professional trader and a former high-technology executive who’s been professionally active for more than 25 years.

He founded Brownstone Research and through it, he has been publishing newsletters like Early Stage Trader, The Near Future Report, and The Bleeding Edge.

What do you get when you join Exponential Tech Investor?

Exponential Tech Investor is a premium research service that allows Jeff to focus on small early-stage companies that have the potential to earn big returns fast. When you become a member, you are entitled to:

You can sign up to the Exponential Tech Investor for $2,000 per year.

Nevertheless, although he is upbeat about the tiny company, not all drugs that go into testing end up reaching the market and he may either be chasing a big opportunity or a bad lead.

When I first encountered the presentation, I assumed that digitizing the health industry meant digitizing health records or the emergence of telehealth. Instead, Jeff is talking about something perhaps even more consequential than those other developments because gene-editing, if successfully applied on large scale, could alter the industry in a big way.

It will allow doctors to effectively treat previously untreatable conditions and this could create a multi-trillion industry as Jeff suggests.

That being said, always be careful with nascent technologies because although they create life-altering opportunities, they are riskier than proven ones.