Wondering what Jeff Brown’s Tech Lag investment is about?

In an event that Jeff Brown held recently, he cautions that it is very difficult to get rich on the tech boom.

But he also claims to have made a ton of money on the technology bull market and tells us that there is a brief window for you to get involved that you cannot afford to miss out on.

Although it sounds promising, I will dissect his presentation to help you determine whether his advice is worth following.

What is Tech Lag?

Brownstone Research, Jeff Brown’s boutique investment research firm, has been promoting a presentation where he claims to know his way around the technology landscape. 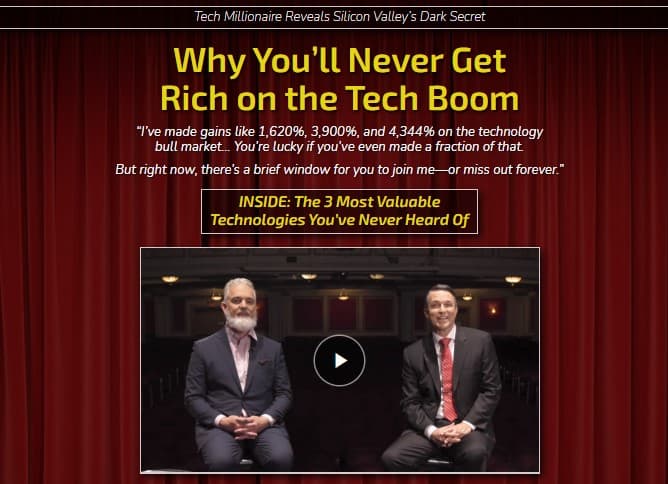 Jeff is a self-proclaimed tech investment specialist who claims to know the sector more than just about anybody. He says that he has made millions many times over and that he understands how best to navigate it.

He acknowledges that technology companies offer great investment opportunities (they have been very profitable) but people are not maximizing the opportunity as they should.

He blames their predicament on a lack of knowledge, or at least, not knowing things early enough, a phenomenon he calls “Tech Lag.” This often leads to them making the wrong moves that amount to missed opportunities or bad investments.

For example, when you don’t know about a technological breakthrough that could explode or become “the next big thing” you miss out on an opportunity to earn big returns.

And this is where Jeff comes in because he claims to have access to information that gives him an edge when it comes to such opportunities. He even refers to himself as an “insider.”

At the same time, he notes that it is usually the small companies that don’t get as much coverage as the household names that benefit the most from a technological breakthrough. As a result, they also tend to be the best avenues for investment.

He explains this by giving the example of a small company that supplies the critical parts needed by a larger company that is pushing for some radical technological advancement. We see this in play in a presentation he made earlier this year when he teased a small company that was supplying RF filters used in 5G devices to big companies.

He argued that the smaller company had more to gain from the 5G buildout than the bigger ones.

Jeff Brown says that the only way to overcome tech lag is to partner with someone “in the know” like him.

He then mentions that he has identified three technological trends that we should pay attention to:

Jeff Brown is one of the newsletter editors I have covered a lot on this blog. He is the founder of Brownstone Research.

He is the lead analyst and edits newsletters like Exponential Tech Investor and Near Future Report.

He has a bachelor’s in Aeronautical and Astronautical Engineering from Purdue University and an MBA from the London Business School.

Jeff has worked in the technology industry for the bulk of his career. He even served as the executive of companies like NXP semiconductors and Qualcomm before becoming an analyst and angel investor. He invests predominantly in technology startups.

How to overcome Tech Lag

Remember how I mentioned that the best way to overcome tech lag was to partner with someone who is an insider?

Jeff Brown’s idea of doing that is by subscribing to his newsletter, The Near Future Report. It gives you access to all the information he gathers regarding new tech breakthroughs.

As the name of the newsletter suggests, the kind of investment advice he gives is the one that is likely to pay off not so far in the future. On the Brownstone Research website, he says that most recommendations involve “large-capitalization growth stocks” involving trends that are “right around the corner on the point of mass adoption.”

If you sign up for it, he sends you monthly issues of his newsletter and each issue has a new way of making money in the industry.

You have 60 days to ask for a refund.

Jeff is right when he says that there is an information gap in the world of investment between ordinary investors and “insiders” who know the markets inside out. He also proposes that you consider investing in three genuine tech trends. Therefore, there is nothing illegitimate about his presentation.

My Final Word on Tech Lag

The main goal of the presentation was to pitch his newsletter, The Near Future Report. Jeff also discusses the impact of the information gap on the returns most investors generate off of their investments. He notes that people who know the market well tend to invest in new technological trends and they earn better returns.

Although I couldn’t determine the name of the companies he was teasing, he was talking about startups and small caps, which are generally riskier and more volatile than big companies. Therefore, if you intend to follow his advice, do more research, and don’t invest more than you are prepared to lose.