They discussed a couple of issues and the one that stood out is a “Mysterious NASDAQ glitch” that allows investors to foresee big stock moves thus enabling them to make good investment decisions.

After watching the whole thing, I decided to put together this article to highlight the main talking points of the discussion.

What is the Outlier Investments Summit?

The Outlier Investments Summit saw the introduction of Jason Bodner to Brownstone Research as one of the main editors. He will be joining Jeff Brown and a few other analysts at the firm.

The summit was also meant to introduce Jason’s new advisory service, The Outlier Investor, which we will get to in a bit. 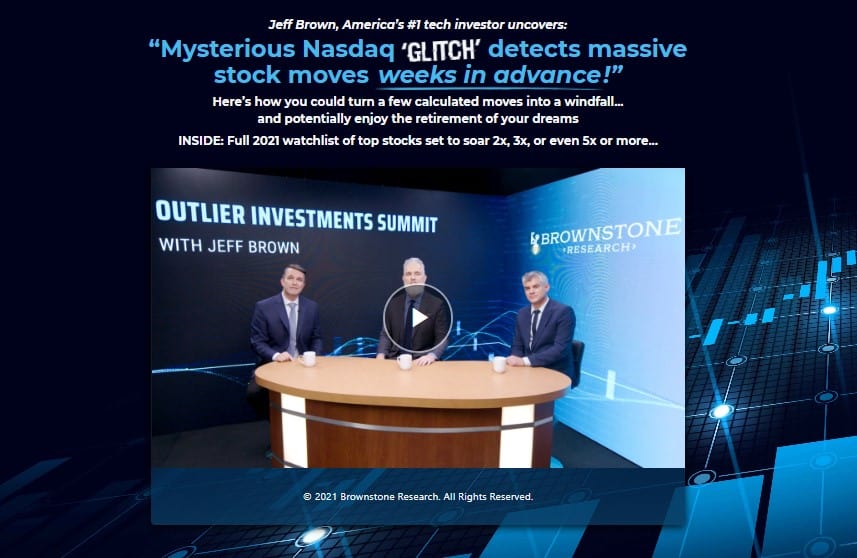 From the beginning, the panelists were talking about a market “glitch” that informs Jason’s investment strategy. He claims that this glitch allows him to identify stocks that are about to rise, weeks before they do. For example, he says that it informed him that there was a crisis brewing before the market dropped due to the pandemic in March 2020.

Jason insists that his job is to find out when big money has gone into a stock all at once, which usually causes the price to go up as a result. He says that he has a proprietary system to track these trades within moments of them happening.

He further says that although the principle is straightforward, these moves are usually invisible to almost everyone. People usually learn about what “the big boys” are doing by watching CNBC and waiting for the SEC filings and by then, the money has already been made. He says that although the big investors are required to make these moves public, there is usually a time delay before this happens that can take weeks.

Therefore, for him, it is important to learn about those moves as soon as they happen without having to wait for mainstream news or SEC filings – and that is where his system comes in.

He bases his strategy on this (and some additional criteria) and his new advisory service is meant for this.

Who is Jason Bodner?

Before he started editing newsletters, Jason spent close to two decades working for big Wall Street firms. He began his career at Cantor Fitzgerald, which he joined in 2001 while their offices were at one of the World Trade Center buildings that went down in the 9/11 attacks. Fortuitously, he was transferred to the London office weeks before the terror attack.

He worked for the firm for 12 years and in his final eight years, he headed the equity derivatives division in North America.

He ran two hedge funds and co-founded research firms that provided money managers with market insights. He is also a public speaker and was once invited to the Chartered Market Technician Association to give remarks.

What do you get for joining Outlier Investor?

Before we get to what you get as a member of the newsletter, Jeff brought Jason in to offer advice that touched on the areas that he wasn’t covering. If you haven’t encountered Jeff Brown’s presentations like the one about an Apple Super Cycle or the one about The Pre IPO Code, you cant tell that he mainly focuses on the tech industry.

Jason came in and launched his advisory service, The Outlier Investor, which will be focusing on investment opportunities outside the tech world.

When you become a member of the newsletter, you receive the following special reports:

In addition to those reports, you also get two new recommendations each month as well as access to the private website and the model portfolio.

If you join via the link provided during the presentation, you pay $2,000 and get a two-year subscription.

There are no refunds. Instead, you have 90 days after signing up for the newsletter to try it out and if it doesn’t meet your standards, you can cancel and use that money on any other advisory service published by Brownstone Research.

Is the Outlier Investments Summit legit?

I think the Outlier Investments Summit is legit. Since Jason and Jeff present their “glitch-based” strategy as infallible, I can see why many people may question whether it is legit. Their lack of examples where they failed, and they inevitably failed, doesn’t help allay those concerns either. But despite that, the summit is legit because Jason shares his approach and whether we think it can work or not, it doesn’t mean that it is not legit.

Benefits of the Outlier Investments Summit

You get to join Outlier Investments at a discount

Drawbacks of the Outlier Investments Summit

My Final Word on the Outlier Investments Summit

The presentation is a formal announcement that Jason Bodner will now be working for Brownstone Research. He joins Jeff Brown as an editor and will be editing a new investment research service called The Outlier Investor.

As I was watching the presentation, I noticed that most of the examples given of outlier investments that could have made a lot of money were the results of backtests. While I have nothing against using a backtest to prove that a strategy will work, it is not the best way to determine the efficacy of a strategy. Survivor bias is likely to skew perceptions and good results in the past do not guarantee success in the future.

But since Outlier Investor is a relatively new service, I’d give it a while first to see how it works before considering joining. That said, do more research on it before you consider joining.