Have you come across Jeff Brown’s Second Wave presentation with the heading “Tech Melt!” but are wondering what it is about?

Jeff has been promoting the pitch claiming that we are about to witness a Second Wave and that several popular tech stocks are likely to plummet. He then presents his readers with a solution in what he terms as “the #1 investment billionaires are turning to now…”

But, are Jeff’s assertions true? Can you trust him?

In this article, we will be going through the presentation to determine whether there’s anything meaningful to derive from it. Stick around because I will also be unveiling the name of his number one stock pick.

What is Jeff Brown’s Second Wave?

The presentation starts in typical fashion with Chris Hurt, who is the host, going through a list of Jeff’s previous achievements i.e. stocks that he once recommended that went on to do well. 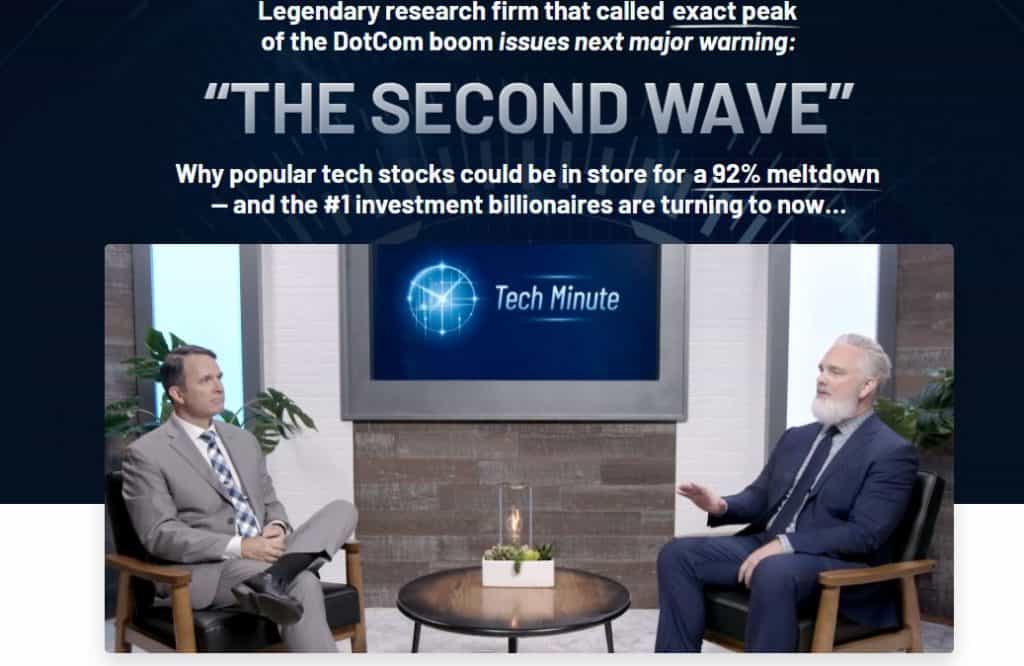 But the discussion quickly segues to the fact that some tech stocks have been going up in an unsustainable, inexplicable way – the economic realities do not justify some of those valuations.

And Jeff is concerned; therefore, he is predicting that some of the tech stocks that have been driving the market rally are likely to fall away and eat away at the gains they’ve made so far. He believes that once the true values are priced in, the market may even crash.

This is why he is recommending that investors stay away from those tech stocks and turn their attention to what he refers to as “market resistant” investments.

He has set his sights on one stock in particular. And, it is in the biotech industry, which he projects could witness a 5,900% upturn.

The number one biotech stock he is talking about is involved with genome sequencing. Genome sequencing is a scientific term that refers to reading the order of DNA bases in a genome. When biologists use this technique, they can cure some diseases effectively – and one of the pathogens they are looking into is COVID-19.

As for the clues he shares regarding the number one stock:

Jeff wrote a report about the company and it has the heading The #1 Biotech Stock 0f 2020: Why the FDA Just Fast-Tracked the “King of Genetic Sequencing.”

In it, he shares details regarding the company, including its name and stock symbol.

However, you won’t be needing to read that report to get the name of that company because I did a bit of research and found out that it is called Illumina (ILMN)

Why am I so sure about this?

Dr. Scott serves on the board of Illumina and in June, the FDA issued it with the Emergency Use Authorization for its genome sequencing-based coronavirus test.

Jeff Brown is an investment analyst and former high-technology executive who’s spent most of his professional life in the tech business.

He worked for companies like Juniper Networks, Qualcomm, and NXP conductors. He also worked in Japan in a similar role where he learned a great deal about international organizations.

Now, he uses the experience he gathered throughout his career to find good investments in addition to being an angel investor. He focuses on small companies that are likely to grow and become the next tech juggernauts. He also dabbles in biotech stocks.

He now edits newsletters like Exponential Tech Investor, Early Stage Trader, The Near Future Report, and The Bleeding Edge.

What do you get from Jeff Brown’s Second Wave presentation?

In addition to revealing his number one recommendation (Illumina), Jeff also warns you about the tech stocks he thinks are likely to lose value.

He has written a dossier sharing details about them. It is called Toxic Tech: 5 Tech “Darlings” to Dump Right Now. Among the stocks he is discouraging his followers from being involved with is Zoom (ZM) because he thinks it is overvalued.

To send you free copies of the aforementioned reports, he wants you to subscribe to his advisory service, The Near Future Report.

He will also send you two extra reports titled:

The Near Future Report subscription costs $49 per year.

Jeff raises a couple of points that make sense. For example, he says that some tech stocks have been overvalued over the past few months; which makes sense because the market seems to be at odds with the reality of the economy and a correction can easily spread panic (although we can’t dismiss the fact that investors have been resilient, climbing a wall of worry since March).

Secondly, he is encouraging investors, who already haven’t, to consider biotech stocks – particularly those that are working on a COVID-19 vaccine. This also makes sense because a vaccine can improve the prospects of the companies that are involved in its production and distribution.

Now, we can’t ignore the fact that he has made some audacious claims that sound too good to be true while barely highlighting the risks involved with some of his recommendations. But that doesn’t mean his presentation is illegitimate; you either agree with it or not.

You could say that the whole point of this presentation was to promote The Near Future Report. If you think about it, all those reports are all sent out for free to people who subscribe to the newsletter.

That being said, Jeff Brown has been going on about biotech stocks for a while now. I suppose he figures that them seeking a vaccine for COVID-19 will be a boon for them – particularly those companies that will be first to it.

However, bear in mind that the hype around biotech stocks has been widespread and some analysts argue that they may even be overvalued at this point.

On the other hand, you could argue that a vaccine can boost a company’s price if it were to happen. So, if you are looking for biotech stocks to add to your portfolio, you can check out what Jeff has been recommending.