Nick Giambruno, who works for Casey Research, released a presentation with a header that reads: “The #1 “Lateral IPO” of 2021.

It was about investing in private companies through something he was calling a “Lateral IPO.” These IPOs present you with a “backdoor” route to those investments.

After sitting through the presentation, I decided to write this article to shed light on the key issues he raised as well as reveal his number one pick.

What is the Lateral IPO presentation all about?

Nick Giambruno did the video about “Lateral IPOs” to talk about a way to get in on private companies before they go public officially.

In the pitch, he says that getting in on ground floor opportunities while they are still unknown allows you to buy on the cheap and bag potentially higher returns than waiting for an IPO to take place and buying then. 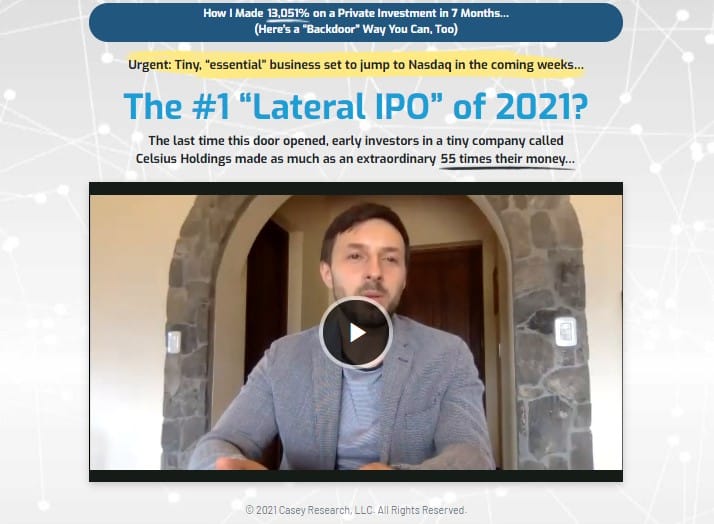 He has picked one company about to do a lateral IPO and he thinks it will do well in 2021.

It is a small company in the marijuana business and from what he says, it is based in Israel. He says that Israel is a technological hub where innovation is rewarded and startups are mushrooming at a fast rate. The impression he gives is that investing in a company based there is a good idea.

What does he tell us about the Israeli cannabis company he is targeting?

He expects these factors to benefit the company and make it soar in the future.

He has written a report called The Lateral IPO: A Secret “Backdoor” into the #1 IPO of 2021 in which he reveals the name of the company and explains how you ought to invest in it. He is giving away free copies to people who sign up for his investment advisory service, Crisis Investing.

You don’t have to sign up to learn which company it is because after doing some research, I discovered the name of the company is Univo Pharmaceuticals (UNVO). It trades in Tel Aviv and it has been involved with former Israeli prime minister, Ehud Olmert. It is considering dual listing on the NASDAQ and the NYSE through a blank check company (this is probably what Nick is calling a lateral IPO).

Who is Nick Giambruno?

Nick Giambruno is one of the analysts who work for Casey Research. He refers to himself as the traveling companion of the founder of the firm, Doug Casey, which means that he travels around the world looking for niche opportunities such as this one in Israel.

He is the editor of Crisis Investing and the flagship investment newsletter, The Casey Report.

Nick is a big believer in making your investments when the market is in turmoil. He refers to it as trading “when there is blood on the streets” and claims to be emulating legendary traders who’ve made fortunes doing that. This attitude was also evident when he released a presentation a while back called The Switch.

What do you get when you subscribe to Crisis Investing?

As I mentioned above, Giambruno wants to send free copies of his report about his number one Lateral IPO to people who join Crisis Investing. So clearly, this is an ad for the newsletter, if you look at it that way.

So what does subscribing to the newsletter entitle you to, besides the free report?

As a member, you will receive:

A one-year subscription to Crisis Investing costs $2,000 if you join via the presentation.

There are no refunds but you can cancel your membership and receive $1,795 that you can then redirect to any other newsletter offered by Casey Research.

Nick talks about investing in a foreign cannabis company. He alerts you to a booming Israeli cannabis market in case you were unaware of it.

He doesn’t share the details of how he wants you to invest in a foreign company. That information is in the reports.

The Lateral IPO is a legit presentation. Nick Giambruno discusses investing in cannabis companies (particularly his pick) before they do an official IPO. Although he doesn’t get to the details of how he wants to do that, he does nothing wrong in expressing his views.

The main issue with the presentation is the over-the-top language he uses as he promotes his newsletter. There is nothing wrong with it if you look past it and objectively analyze its strategy, but it can be misleading to those who are not used to it.

My Final Word on Lateral IPO

I think what Nick Giambruno refers to as a “Lateral IPO” is simply an acquisition through a blank check company (Special Purpose Acquisition Company). SPACs have been getting a lot of attention and investment gurus haven’t been left behind. I even recently encountered a presentation by a group of investors at NICI about investing in a SPAC that has marijuana interests.

About his number one pick, I urge you to do more research into it before you consider buying (in any form). There are no guarantees that it will do well no matter how Nick says it will. Besides, he is offering general advice and, therefore, is unaware of your unique financial situation.