When I received an email inviting me to the event, I found it peculiar that Louis, whom I’ve always known as a growth investor, was promoting an “income project.”

I pieced together any information I could get about the project to come up with this review.

In it, I provide a summary of what Louis is expected to discuss during the event as well as give my opinion on whether you can trust him enough to attend the webinar.

What is Accelerated Income Project?

“Accelerated Income Project” is the title of a webinar that Louis Navellier of InvestorPlace will host from his home in Florida on May 20th.

Louis is a quant (quantitative analyst). This means that he employs complex mathematical models to analyze securities as he seeks investment opportunities. 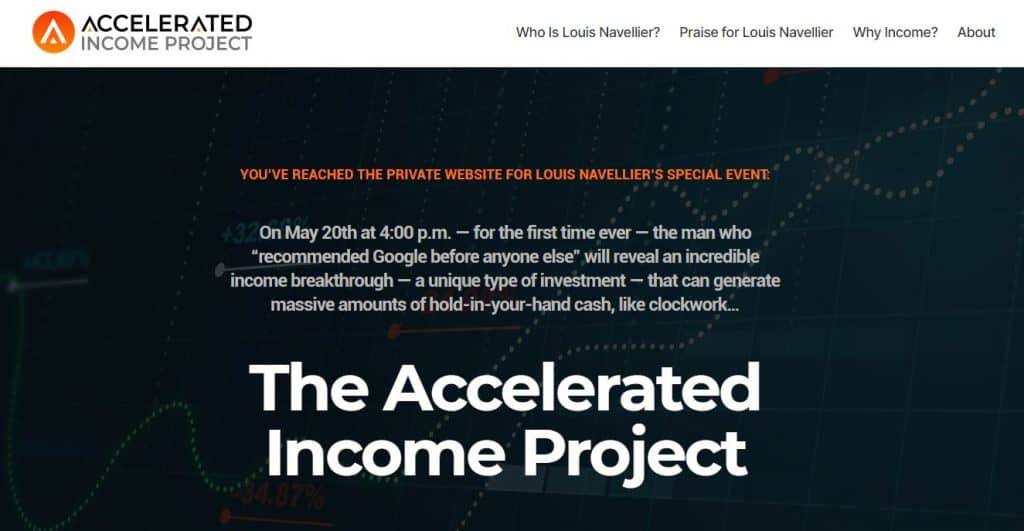 Recently, he deployed his algorithm to scour the market in search of new opportunities when he stumbled upon what he refers to as a hidden corner of the market.

In the unknown part of the market, he says that he unveiled a form of investment that can send thousands of dollars into your account without fail for the next three decades.

He decided to base the Accelerated Income Project on his discovery.

He plans to launch the new project during the summit to target retirees or any person who would like to gain access to a new income stream to build their retirement nest egg.

Who is Louis Navellier?

Louis Navellier is a growth investor and a quantitative analyst. He has been active in the investment universe for more than four decades.

He creates computer-based systems that analyze the market and isolate investment opportunities that few others can identify.

Courtesy of his analysis, he has made bold calls over the years that have yielded his readers massive returns. For example, he recommended Apple, Microsoft, Google, and a few other household names while they were still small companies.

His success has earned him enough attention to be featured by publications like Forbes (which called him “King of Quants”), The New York Times, and MarketWatch.

How does Accelerated Income Project work?

The unique type of income stream that Louis plans to unveil during the webinar can purportedly earn you 10 to 40 times more returns than the highest-paying dividend stocks.

Here are a few facts about the obscure revenue stream that Louis is touting:

Louis acknowledges that as a growth investor, it is out character for him to start pushing his readers towards income investments.

He says that he went down the income path when he realized that America was headed towards a retirement crisis. Half of the baby boomers were approaching retirement but they weren’t adequately prepared for it financially.

He fired up his computer and decided to find an investment that could provide retirees with quick income fixes that they could rely on. That’s what led to him to launch the Accelerated Income Project.

He says that the income stream he has identified will be so reliable, it may behave like the regular paychecks you used to receive while you were still working – if you have already retired.

How to attend the Accelerated Income Project webinar

The webinar will happen on May 20th at 4 PM ET.

The event is available for free to anyone with an internet connection. You don’t even have to be a member of any of Louis’s services.

However, you have to book a place by providing your email address in the online form provided.

They will use the email to update you on the event as well as register you for Louis’ free e-letter titled Louis Navellier’s Market360.

Although you can opt-out of them, Louis will routinely send you event updates as well as promotions for his services via the email you use to register for the summit.

Accelerated Income Project is legit. I have arrived at this conclusion because the project involves Louis Navellier.

Louis is renowned for his exploits in the market going back to the seventies when he first modeled a computer system that beat the S&P 500 index by a factor of 3 to 1. Although he was still in school when he did that, he carried on being successful in the market when he graduated.

Furthermore, the Accelerated Income Project does not raise any red flags that would lead me to conclude that it is a fake scheme designed to deceive people. I see it as an analyst sharing advice that can lead to success or failure depending on the markets.

Louis Navellier, a well-known growth investor, turned his attention to income investing because he wanted to help retirees find instant sources of income. He realized that growth investing, though lucrative, takes time to earn returns; time that most people don’t have.

He claims that his income alternative is more reliable and lucrative than conventional income investments.

However, rather than focus on his assertions and bold claims, you should wait to see how his new income project fares. The last thing you’d want to do is follow his advice blindly and lose money when the investments tank and sink your savings. If you decide to take his advice, do not plow all your savings into his recommendations.