Looking for a review of David Fessler’s latest presentation regarding Mars Technology?

The presentation has been getting a lot of attention of late because it concerns a “Mars Technology” that could coincidentally be the largest economic opportunity of the 21st century (Fessler’s words, not mine).

I don’t know about you but Space exploration and the prospect of landing (and living) on Mars has been an exciting prospect for most people. So, when I received an email from Dave, I was eager to see what he was talking about.

Suffice to say it wasn’t what I expected and in this review, I will give you an overview of what the presentation was about if, like me, it piqued your interest.

Dave Fessler believes that he has found a “Mars Technology” that may be the largest economic opportunity of the 21st century. Unsurprisingly, it will also give us what could be the next stock of the decade.

To put its impact into context, he gives examples of other companies that were impactful enough to earn the title of “stock of the decade” in decades gone by. He gives examples such as Walmart in the 1980s, Cisco in the 1990s, Monster Beverage in the 2000s, and Netflix in the 2010s to underline the impact his next stock pick will have in the 2020s. 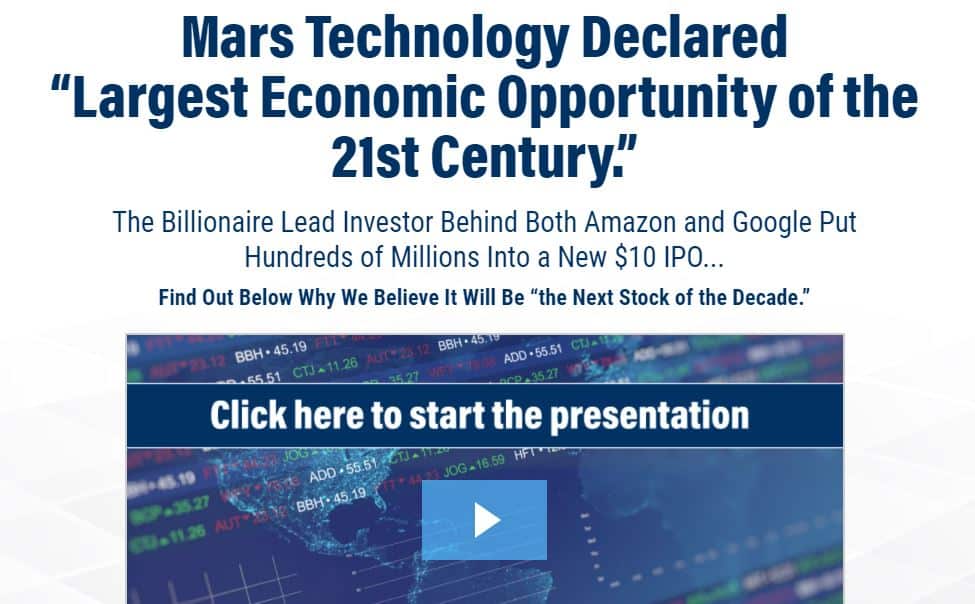 So, what is this “Mars Technology” Fessler is all excited about?

It all has to do with a fuel cell that can generate clean electricity by reacting natural gas with air.

It sounds similar to what was touted in the Tesla Killer blue gas pitch.

The fuel cell comprises a ceramic tile made of sand coated on each side with “a special ink.”

The scientist who discovered this fuel cell didn’t initially set out to develop one. He had been commissioned by NASA to come up with a way that we could generate oxygen for survival and fuel on Mars using the elemental gases found on the planet.

He developed a tile made using sand and the proprietary ink through which he passed an electric current to produce natural gas and breathable air. Then, out of curiosity, he reversed the process (i.e. he supplied the tile with natural gas and air) and realized that it produced a current.

Later on, scientists discovered that if you stacked a few of those tiles together, you can produce more energy and thus the fuel cell Dave is talking about was born.

They didn’t stop there because they realized that if you stack many fuel cells together to form a bank the size of a refrigerator, you can produce even more energy. They developed banks that can generate 1.7 to 2.1 million kilowatt-hours (kWh) per year.

One company was behind all this and Dave Fessler wants you to invest in it.

The Next Stock of the Decade

Fessler tells us that the company behind the revolutionary fuel cell technology is perfectly placed to dominate the next ten years. He doesn’t reveal its name outright but drops a few clues to point us towards it:

He wrote a report about it called The Next Stock of the Decade: Discover the $10 Stock Set to Change the World in which he gives us the name of the stock and its ticker symbol.

However, you won’t be needing that because after doing some research, I found out that the company in question is Bloom Energy (BE).

Bloom Energy, which is based in San Jose California, manufactures solid oxide fuel cells that produce electricity by using natural gas or biogas as fuel. Its fuel cells are wafers made of sand that is stained with a proprietary ink.

Who Is Dave Fessler?

David Fessler is a trained engineer and a veteran of the semiconductor industry. He helped design automated systems for Silicon Valley, some of which are now used by Amazon, the Department of Defense, and Apple to detect anomalies in their software.

He joined the financial services sector when he started working for The Oxford Club as a newsletter editor. He is the Energy and Infrastructure strategist owing to his background in the industry.

Recently, he has been quite vocal about 5G and the investment opportunities associated with it. He even released a presentation about “5G Contracts” to discuss those opportunities.

What this shows is that since he became an investment analyst, most of his analysis has been diverted towards technological trends that may generate sizeable returns.

How to invest in Mars Technology

David Fessler’s intention when he released the presentation was to get you to subscribe to Strategic Trends Investor ($49 per year). It is an advisory service he co-edits with Matthew Carr.

It centers on significant industry trends and both Matthew and Dave give their perspective on the best way to make money from such opportunities.

Fessler also promises to send you a free copy of his book The Energy Disruption Triangle: Three Sectors That Will Change How We Generate, Use, and Store Energy. In it, he talks about how the energy sector is changing and how to make money from it.

I think the Mars Technology presentation is legit.

If you want to have an expert talk to you about technological advancements and the opportunities they are creating, you can’t do better than David Fessler. He is an engineer by trade and has worked for a few major tech companies in executive roles. Therefore, it is safe to say that he knows how the industry works.

In the presentation, he touts one stock that he thinks will dominate the market in the coming decade. He is either right about it or he has gotten it wrong. Now, we won’t find that out right now and I think it would be premature to judge him on that.

That being said, I think the pitch is legit because you get to learn something from it even if you don’t agree with what Dave is proposing.

If you are in the market for a risky but potentially lucrative investment opportunity, I think you are the kind of investor Fessler wanted to receive his message. Bloom Energy (BE), which he describes as “The Next Stock of the Decade,” owns a fuel cell that produces clean electricity off-grid.

This kind of energy source has a target consumer-base which keeps growing and the fact that it is environmentally-friendly helps its cause. Therefore, the opportunity for growth is immense if it plays its cards right.

That being said, it has had a volatile run since it went public, which is not a good sign if you are looking for a secure investment. You also have to consider that it has been around for 20 years. Ultimately, you have to decide whether it is the right investment for you.