Looking for a review of Paul Mampilly’s presentation titled The 12 Million Mile Battery?

I had been receiving emails from Banyan Hill for a while, so I decided to take a closer look at what it was all about.

Paul believes that we are about to witness the creation of a “new energy market” that will mint new millionaires in the next decade and he wants to get you in on the action. He states that you can add a few extra thousand dollars to your account without having to invest any money.

In this review, we will be examining the merits of those claims as well as learn more about the “new energy market” he is referring to. By the end of this article, I will also share the name of the company he wants his followers to invest in.

What is The 12 Million Mile Battery?

The 12 Million Mile Battery is the title of a presentation published by Paul Mampilly in which he touts a company behind a super battery that he thinks will change the energy industry this coming decade. 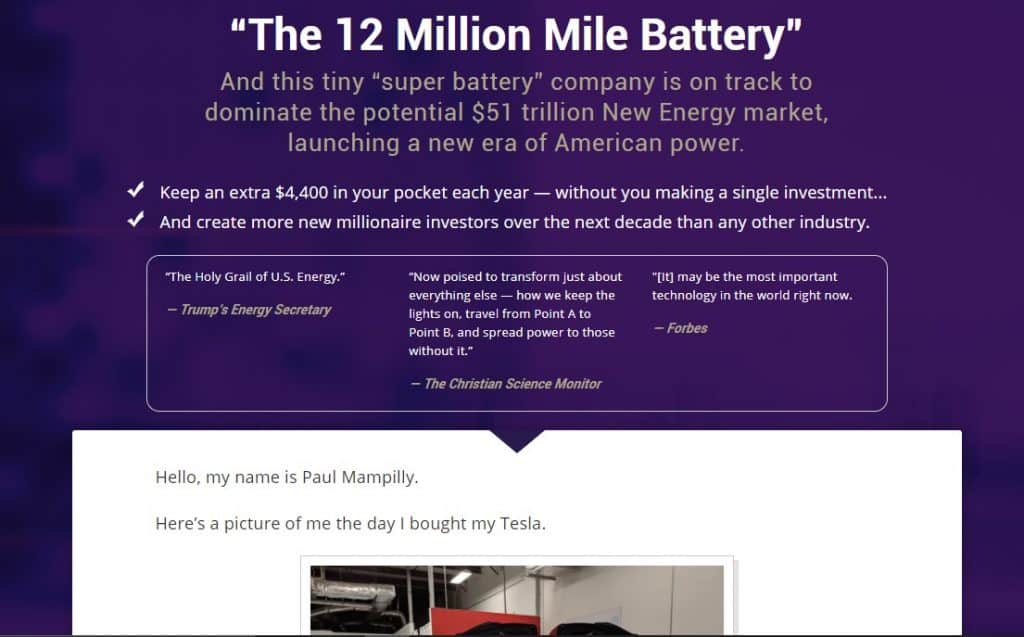 He explains how they expand during charging as they absorb Lithium ions and contract as they discharge (shedding the Lithium ions). Consequently, the batteries fracture quickly and have a relatively short lifespan.

But Paul says that one relatively unknown Californian company has found a way to alleviate this problem by developing a modified anode. The new anode replaces the conventional silicon anode with one that uses silicon nanoparticles.

Mampilly says that with the new technology, we will have super batteries that will:

He says that they won’t just be used in electric vehicles; they will be used in emerging technologies like 5G, IoT, AI, and blockchain as well as revamp the alternative energy industry (green energy).

All told, he expects the improved batteries to add value to industries worth an estimated $250 billion. He believes they can go up 20,300% to about $51 trillion.

Who is behind the 12 Million Mile Battery pitch?

He began his career more than 25 years ago working for Bankers Trust as an assistant portfolio manager. He rose through the ranks and soon found himself managing accounts for institutions like The Royal Bank of Scotland, Deutsche Bank, and ING.

The highlight of his money management career came while he was working for a hedge fund. During his stint there, he helped grow its assets from $1 billion to $6 billion. Barron’s recognized his achievement by branding the fund as the “world’s best” that year.

How did a high-flying hedge fund manager find himself editing newsletters?

Realizing that he was only making money for the sake of it for some of the world’s richest people, he decided to quit and divert his attention towards regular retail investors by providing cheap investment research services. He wanted to give back and this was his way of doing it.

How to invest in The 12 Million Mile Battery?

Ultimately, as great as a “super battery” will be for civilization, Paul is more concerned with how his followers can make money off of it.

As I mentioned earlier, he has earmarked a relatively unknown company based in California that will produce the nanomaterial used in the anodes.

He reveals a few details about it to give us a hint as to its identity (although he hopes you don’t figure it out and, thus, have to subscribe to his newsletter for that). Here are the clues he gives:

After doing some research, I discovered that the company he is talking about is called Sila Nanotechnologies.

Sila Nanotechnologies has developed a “powder” that will replace graphite powder in Lithium-ion batteries enabling them to store energy more efficiently as well as reduce weight.

The company is based in Alameda, California, and was established in 2011 by Gene Berdichevsky (Tesla’s Employee #7).

The point about it being established by Tesla’s “employee number seven” was the smoking gun because it pointed me to this feature by Forbes that uncovered everything I needed to know. Paul Mampilly has shared all the details about it in a dossier with the heading $51 Trillion in Endless Energy: Get Rich on the Battery Breakthrough of the 21st Century.

You can get your hands on the dossier for free by subscribing to his advisory service called Profits Unlimited.

How much is Profits Unlimited?

An annual subscription costs $47 if you are among the first 1,000 new members and join via the presentation (through the links provided after the presentation). The regular price, which we can assume is the auto-renewal fee, is $199.

Profits unlimited comes with a 12-month money-back guarantee. Therefore, if you want to cancel your membership, call customer support to start the process.

Is The 12 Million Mile Battery legit?

When I reviewed Profits Unlimited a while back, when this question arose, I concluded that it was legit and I will maintain that assessment this time around too.

Back then, I expressed concerns about the marketing practices Paul uses whereby he insists on talking about his successes while downplaying his shortcomings. I mentioned that it is a common marketing tactic used by newsletter editors and that if you look at the points raised objectively, you realize that there are valid points.

The same applies now because, from his presentation, you get the impression that the new “super battery” will solve all our energy problems. The reality is different because the Sila Nanotechnologies only seeks to improve on the current battery by nowhere near the levels Paul is talking about.

What you ought to take away from the presentation is that Sila Nanotechnologies is a great company to invest in.

My Final Word on The 12 Million Mile Battery

The 12 Million Mile Battery is a pitch for Profits Unlimited.

But if you are to look at it from the literal sense, the main takeaway from the presentation is that if you want to make money off of “The 12 Million Mile Battery,” you should invest in Sila Nanotechnologies.