Welcome to my review of the Quantum Glass Battery.

I’ve been receiving emails for the presentation by Matthew McCall for a while so I decided to take a closer look.

I’ve researched it to find out more and put together an honest review delineating what the presentation is all about.

Keep reading below to get all the info

What is Quantum Glass Battery?

“Quantum Glass Battery” is a pitch by Matt McCall about a new kind of battery that will trigger “an energy revolution.” During the presentation, he urges you to subscribe to his investment advisory service, Investment Opportunities. 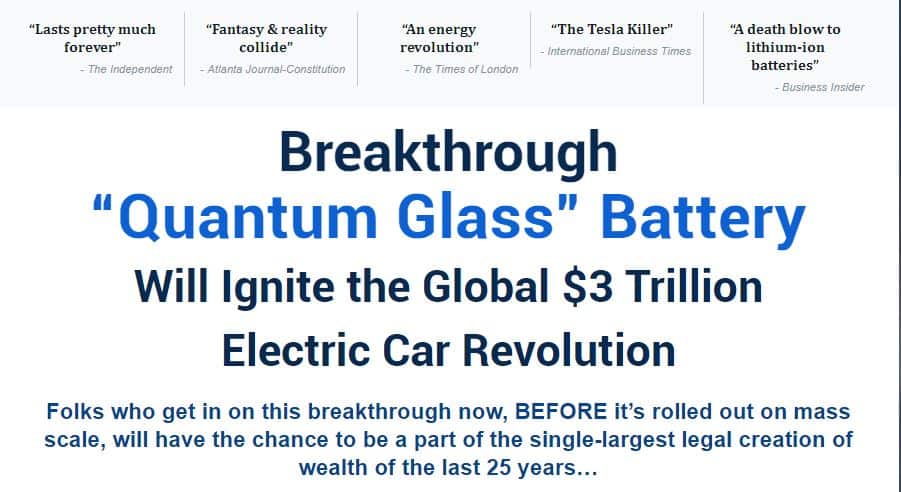 Although the Lithium-ion battery has served us well so far, it is still inefficient and we could do with a much-improved battery that overcomes its drawbacks.

Matt has found the next battery (quantum glass battery) that will probably take over from the Lithium-ion battery leading to what he considers a battery revolution.

He doesn’t delve into the technical details much but outlines the following properties of the quantum glass battery that will give it an edge over what we have now:

The man who invented the Lithium-ion battery, Dr. John Goodenough, thinks it is a worthy successor to his battery.

By overcoming the challenges posed by the current batteries, the quantum glass battery will revolutionize the electric car industry.

If the new battery will be as big a deal as Matt makes it out to be, you need to invest in a company that will be manufacturing it to cash in on its introduction.

Who is Matt McCall?

Matthew (Matt) McCall is the founder of Penn Financial Group.

He began his career on Wall Street where he worked at Charles Schwab as a broker. He quit in 2002 and embarked on writing investment newsletters.

He claims that the career change was inspired by his desire to help retail investors make money than further enriching the wealthy.

He publishes most of his work via Investorplace, a legendary publishing group responsible for Fry’s Investment Report and  Ultimate Crypto (also by Matt McCall).

He is also an author of a book titled The Next Great Bull Market that teaches investors how to pick winning stocks in a bull market.

He has appeared on TV on networks like Fox News, CNBC, and Bloomberg TV and once co-hosted a show on radio called Winning on Wall Street.

Why should you be excited by the Quantum Glass Battery?

The new Quantum Glass Battery is made of something called quantum ion glass. It is a solid conducting material that replaces the inefficient liquid electrolyte in conventional batteries. The electrodes are also more effective.

As a result, the new batteries are non-flammable, cheaper to build, and more rugged. The costs of production are also significantly lower (from $1,000 to $30 per kWh).

The new and improved batteries will not only power EVs and gadgets, but they will also help us realize the potential of phenomena like the Internet of Things, AI systems, self-driving cars, among others.

How you can invest in the Quantum Glass Battery industry

The most important thing is to find a company that will bring the battery to the masses. Matt has found one tiny company that is still relatively unknown that will manufacture these batteries.

Here is why he thinks it is a good pick:

Matt has written a report sharing the full details of the company. It is called The Biggest Battery Breakthrough in a Century: How to Cash in on the $3 TRILLION Electric Car Revolution.

If you are willing to invest in the company he is touting, you have to read the report.

The only way you will get the report is by signing up for Matt’s investment advisory service, Investment Opportunities. The subscription fee for one year is $199 and it renews every year.

Matt guarantees that if you fail to register 1,000% in positive returns in one year when you follow his recommendations, he will refund your membership fee in full.

In addition to the report about the EV quantum glass battery, Matt will also send you two other reports for free:

Although the technology may sound a bit too good to be true (I mean, how many times have we encountered someone claiming to have the next best battery only for them to disappoint), this one may be the real deal.

It is legit because Dr. John Goodenough is involved with its production. He is part of the team that intends to make it available to the public.

If you don’t know who he is, Dr. Goodenough is the oldest recipient of the Nobel Prize in Chemistry for inventing the Lithium-ion battery.

On top of that, he also invented RAM (the memory we use in computers).

The Quantum Glass Battery presents us with the opportunity to invest in a company that will likely become big when it takes off. EV manufacturers will want to get their hands on the improved battery making it a solid investment if it reaches mass adoption.

If you are sold on the idea, you need to invest early to get in on the ground floor of a generational opportunity. There are no guarantees that the company will take off, but it could be worth a shot.

What Is The Quantum Glass Battery?

Quantum Glass Battery is a presentation from Matt McCall about a new battery technology that he claims will trigger an energy revolution.

Who Is Matt McCall?

Matt McCall is the man behind the Quantum Glass Battery pitch. He began his career on Wall Street where he worked at Charles Schwab as a broker. He quit in 2002 and embarked on writing investment newsletters.

How To Invest In Quantum Glass Battery Stock

Matt McCall has put together a report called The Biggest Battery Breakthrough In A Century. Inside this report he shares all the details on the Quantum Glass Battery stock. To receive the report you’ll need to join Matt’s research service called Investment Opportunities. It costs $199 per year.

The Quantum Glass Battery presentation is legit. Although the technology may sound a bit too good to be true the research we carried out suggests that it could be true.