Teeka Tiwari released a presentation called The 1170 Account in which he gave his outlook on blockchain investments.

He talks about a new type of account that the elite are creating that is earning them up to 172X returns more than what an average saving account does and it has to do with blockchain.

In this piece, I give you an overview of what the presentation was all about for you to decide what you will make of it.

The 1170 Account is a presentation by Teeka Tiwari in which he introduces us to this unique type of account that allows people to earn 172X greater returns on their money than what a traditional savings account gives them. 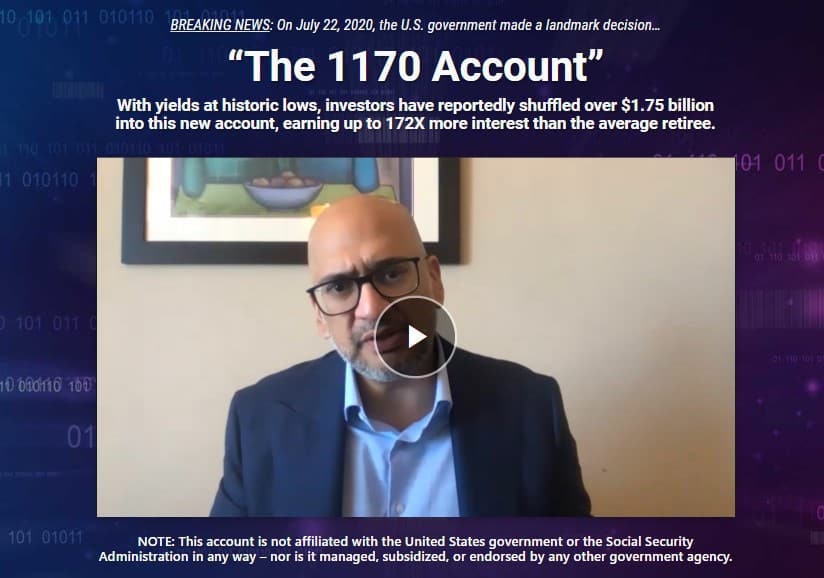 Tiwari complains about the relatively low-interest rates that saving accounts pay these days. And he is right to do that because, in 2020, there was a point when the interest rates on the average high-yield saving accounts had fell to just 1%, and this was down from 2.5% the previous year.

He says that these rates are a far cry from what savings account used to pay merely 20 years ago; therefore, he believes that retirees are better off not putting their money in these accounts because the returns are too low.

He has an alternative.

Tiwari tells us that American banks were only recently allowed to create this type of account thanks to a directive issued by the Office of the Comptroller of the Currency (OCC) – a branch of the treasury that regulates and supervises banks.

It issued a document called “Interpretive Letter #1170” that authorized banks to open new high-yield financial accounts for their clients that are “blockchain-based.”

Since blockchain is expected to grow exponentially in the next few years, these special accounts are likely to benefit from this growth thus explaining the high interest rates they pay.

This presentation bears some similarities with another one Tiwari did that was about a “New Banking Rule Set to Affect 234 Million Americans.” In both pitches, he says that banks were given the prerogative to open a new type of account by the OCC.

But that’s as far as the similarities go because, in that other presentation, he told us that these accounts were meant to hold cryptocurrencies – bank accounts that could hold digital currencies – while in this one about the 1170 account, the accounts will be “blockchain-based.” In the previous one, he was urging people to invest in cryptos while in this one, he wants us to invest in companies that have something to do with blockchain.

Tiwari has his eyes set on one company that is offering these 1170 accounts. He says that big-name investors like billionaires, former executives, celebrities, and pension funds are investing in it and that it has a two-year head start.

He doesn’t reveal much more than that and tells us to read more about it in a report he has written called The “1170” Account: How to Earn Up to 172X More in Retirement. He is giving away free copies of it to people who sign up for his advisory service called The Palm Beach Letter.

Who is Teeka Tiwari?

He began his career on Wall Street as an 18-year-old after arriving two years earlier from Britain. He had a rough childhood in the UK and when he came over, he was determined to make something of himself.

When he got his entry job on Wall Street, he worked his way up until he eventually became a hedge fund manager.

He left that world and decided to help out the common folk with whom he resonated due to his upbringing. He started teaching them how the market works and proposed new investment opportunities to them through newsletters.

These days, he mainly focuses on cryptocurrencies and a good example is when he did an event called The Crypto Catch Up.

What you get when you join The Palm Beach Letter

Teeka Tiwari is the editor of The Palm Beach Letter and it is the flagship newsletter offered by the Palm Beach Research Group. With 112,000 subscribers, it is one of the most-read services they offer.

He doles out investment advice that centers on the biggest market trends. Although the advice mostly leans toward cryptocurrencies, he also writes about other sectors like precious metals, dividend stocks, real estate, just to mention a few.

When you join it, you will typically receive his recommendations every first Thursday of the month but that won’t stop him from reaching out if he finds other opportunities in the middle of the month.

You also gain access to a website where you’ll find his special reports, past issues of the newsletter, and other things that are relevant to the newsletter.

I think Tiwari’s presentation about The 1170 Account is legit.

Teeka Tiwari has been a big advocate for cryptocurrencies for a long time and him touting blockchain investments is consistent with what we’ve come to expect of him. Therefore, I think this presentation is legitimate.

However, that does not mean that his recommendations are spot on. He is just giving his opinion and they may not be accurate.

As I highlighted in the presentation, this is not the first time that Tiwari is talking about a directive issued by the Office of the Comptroller of Currency. In his other presentation, he was talking about new types of bank accounts that could handle cryptos, and in this one, he shifted slightly and talked about them being block-chain based (which isn’t that much of a difference, technically).

The differences come with the kind of investment he is touting. In the other pitch, he was talking about buying up cryptos, and here, he is targeting some company that has links to blockchain.

To be fair, Tiwari has been pretty consistent about investing in cryptocurrencies, and in 2020, he was vindicated as we witnessed them scale the heights in the market, easily overshadowing the Cryptocurrency Bubble of 2017.

That being said, there is no guarantee that he is right this time and if you are to follow any advice he gives, you should objectively evaluate it first.