Dave Forest, who is best known for his involvement with the mining industry, recently released a presentation called The 5G Keystone.

In this article, I give you an overview of the pitch as well as reveal the name of the company I think he may be teasing.

What is the 5G Keystone? 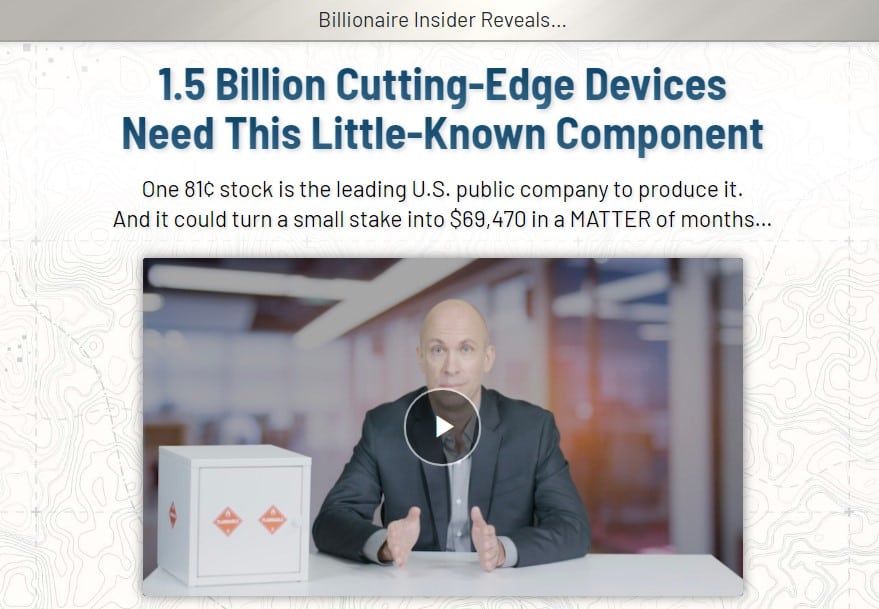 In this one, Dave talks about investing in a company that will provide a crucial piece to the 5G puzzle. He talks about it being such a critical component, it will help launch a $17 trillion industry.

He walks us through past examples of “keystones” (important technologies) of major industries whereby companies that provided them helped create wealth for the investors who took them seriously. In almost all instances, these tended to be relatively unknown companies whose stocks soared.

About 5G, he says that he has identified its “keystone” and without it, things like laptops, self-driving cars, and smartphones that tap into the network will be “nothing but empty shells.”

He reveals that he is talking about Neodymium, a rare earth element that is used in the manufacture of strong permanent magnets. That makes it an invaluable component of many electronic devices – which according to Dave will number up to 1.6 billion devices.

If you are unaware, the technology industry heavily relies on rare earth elements. We’ve seen companies like Apple and Tesla go to great lengths to secure reliable supplies of those materials because electronic circuits can’t be fabricated without them.

Dave also correctly points out that China accounts for a big chunk of the supply of Neodymium and that the US government has been keen to change that because it recognizes the strategic importance of securing such a vital resource.

The company behind The 5G Keystone

Dave Forest says that for a while, America has not been producing its Neodymium and there may be a supply crunch in the next few months. But, due to the investment going into the supply chain, he expects a few American companies to start supplying the element.

Among them, he has identified a public company that trades at 81 cents and that is roughly 1/100,000 the size of Amazon. He says that he heard about it from three billionaires and an insider connected to the Pentagon.

It has perfected the process of extracting Neodymium (which is quite convoluted) using proprietary technology that produces it with a purity of 99.999%.

It also owns the largest Neodymium deposits in North America, about 1.2 million metric tons to be precise.

So, what company could he be teasing?

After doing some research, I think he may be talking about Texas Mineral Resources Corp. (TMRC). It is a public company that trades in the OTC markets. It has been consolidating its rare earth processing facilities (among which is Neodymium).

It was trading at 81 cents in April but has since risen above that as you can see from the stock chart I have linked to above.

Forest wrote a report called The 5G Keystone: 6,847% Gains as 1.5 Billion 5G Devices Roll Out in which he details the company he is teasing. He is willing to give it away for free to new members of his advisory service, the International Speculator.

Who is Dave Forest?

Dave Forest is an investment analyst who works for Casey Research as its natural resource expert. Casey Research is a firm that was started by Doug Casey to publish investment newsletters and other material to inform investors of novel investment opportunities. It works like Investorplace.

Dave joined the firm in 2004 and has been writing about investing in oil, natural gas, uranium, and renewable energy.

Besides writing about it, Dave has been working in the mining sector for more than two decades. During that period, he has started various mining companies and raised more than 80 million dollars to finance them.

Some of his most noteworthy ventures include acquiring a modern exploration license in Myanmar and developing a 10-million-ounce gold deposit in Colombia.

What you get when you join International Speculator

The whole point of teasing the Neodymium-producing company was to get new members to sign up for International Speculator.

It is an investment advisory service through which Dave Forest shares investment insights about the mining sector, leveraging his experience in the industry. If you decide to join, you will receive:

The first one is about a company supplying the copper needed to build the 5G infrastructure and the second one concerns a company that may become the leading Nickel supplier to Tesla (used in batteries).

You get one year of the International Speculator for $1,995.

Is The 5G Keystone legit?

I think The 5G Keystone is a legitimate presentation.

Dave Forest’s claims that China has been a key supplier of rare earth elements is true. The Department of Defense has recognized the strategic importance of the US securing its supply that it has invested in local companies to reduce over-reliance on a foreign country like China that many consider a rival. Dave mentions all this.

That being said, it is hard to tell whether his pick will go up by 6,847% because the markets are inherently unpredictable and it is near-impossible to tell whether this is feasible.

When Dave Forest released this pitch, he wanted new members to sign up for the International Speculator by linking the report that would reveal its name (which he stops short of mentioning) to the newsletter; you have to subscribe to know its name.

He also urges his audience to stay away from big companies like Qualcomm, Samsung, and apple because he thinks that you can make more money by investing in smaller ones that will contribute to the 5G buildout.

Since he is teasing a penny stock (81 cents per share), I would urge you to be cautious if you intend to follow his recommendation. Such companies, though with massive potential, tend to be extra-volatile and thus extra-risky.