Seven Figure Publishing and Agora Financial have been promoting a webinar by Ray Blanco about what he terms “The Biggest Announcement in Tesla’s History.”

The header reads “If everything goes like he says, shares of this $2 stock could go soaring as much as 100% overnight… and 1,000% over the next 3 months.”

In this article, I walk you through the presentation and reveal the name of the $2 stock he is teasing.

What is The Biggest Announcement in Tesla’s History?

When Ray Blanco decided to do a presentation about The Biggest Announcement in Tesla’s History, he wanted to advertise his newsletter, the Catalyst Trader. 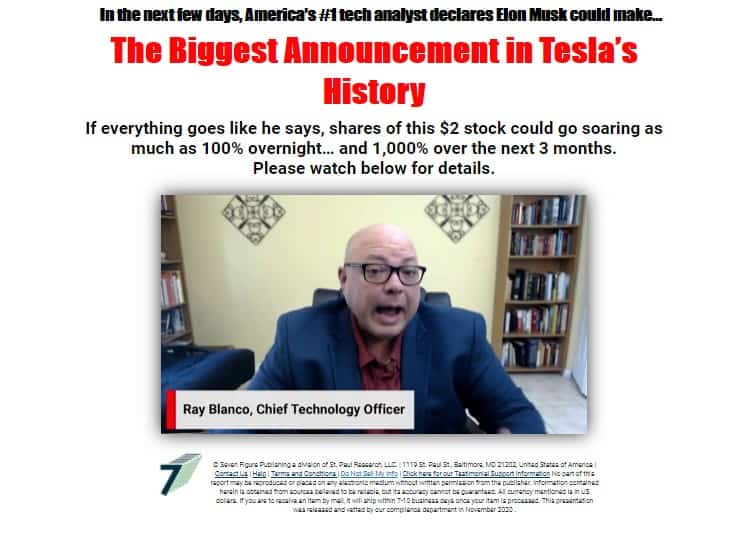 At the same time, he was teasing a small company that may benefit from a big announcement by Tesla. As he was releasing the video, the stock was trading at $2.

He says that the small company trading for $2 was founded by a former senior Tesla battery engineer who may have developed a battery that has a longer lifespan than what is currently on the market.

He wants you to invest in it because he sees it going up as soon as the announcement is made (and a few months after that).

So, what do we know about the small company from Blanco’s presentation?

He wrote a report about it that has the title it 10X Your Money With the Million-Mile Battery and the only way to get a free copy is signing up for a new advisory service by Ray called Catalyst Trader.

But as promised, you don’t have to subscribe to a newsletter just to reveal the name of that company because after doing my research, I found out that it is called Novonix Limited (OTCMKTS: NVNXF or ASX: NVX).

Novonix is an Australian company that makes synthetic graphite, which is used in batteries; so that’s the battery material he was referring to. In addition to making graphite, they also provide high-precision battery testing equipment.

The co-founder he is referring to that used to work for Tesla is a gentleman called Dr. Jeff Dahn. He is a major figure in lithium-ion battery research and was employed by Tesla in 2016.

He did his lab work at Dalhousie University in Canada (the university that Ray alludes to) and they released a research paper with their findings. His son is involved in the company too.

In the presentation, Ray also mentions that in addition to investing in the million-mile battery company, you can also invest in SPACs.

He talks of investing in Fisker Inc. (NYSE: FSR) and has written a report called The Secret to Doubling Your Money With SPACs.

We have seen investment gurus talk about investing in SPACs before and Jeff Brown’s Blank Check Speculator comes to mind.

Who is Ray Blanco?

Ray Blanco is the chief technology officer at Seven Figure Publishing, which is a division of St Paul Research. He is also involved with Agora Financial.

He has been in the newsletter editing business for more than 10 years and during that time, he has been writing about technology companies likely to do well in the market. He has a background in IT.

His research methodology involves doing interviews of people leading the companies he is considering and traveling to their factories if need be. He says that he doesn’t just sit in an office reading financial reports and believes in a “boots to the ground” approach.

He also writes about marijuana stocks.

What do you get when you sign up for Catalyst Trader?

This is a relatively new service that he launched to write about companies he felt he shouldn’t discuss in his main newsletter, Technology Profits Confidential.

He says that he is not comfortable writing about them in the main newsletter because it has a readership of 78,000 people and revealing such small companies to so many people can artificially inflate the price as they rush to buy up shares.

He will be writing about small tech startups and when you sign up, you will get:

Is The Biggest Announcement in Tesla’s History a legit presentation?

I think it is a legitimate presentation.

This doesn’t imply that I am in agreement with Ray about the tiny company; it may not soar 100% overnight and 1,000% in three months as he tells us it will. It’s just that there is nothing wrong with him expressing his opinions and making his predictions. Therefore, I think the presentation is legit.

My Final Word on The Biggest Announcement in Tesla’s History

Although Ray used The Biggest Announcement in Tesla’s History to introduce his new investment research service, Catalyst Trader, he also teases Novonix Limited as a company that is likely to soar when people find out that it has a partnership with Tesla.

It supplies Tesla with graphite and Ray thinks that it will do well when people learn it is involved that way. Now that I have revealed it for free, you don’t have to subscribe to a newsletter for $1,995 to find that out.

But before you consider investing in the company, you should research it further. Don’t just invest in it because someone from the internet told you it is the next best thing.