Bryan Bottarelli and Karim Rahemtulla published the Election Survival Summit a day after the election.

They wanted to help ordinary investors make sense of an election that they believed was tough to call while at the same time being very impactful – it would have a bearing on the way the market would perform.

In this review, I will be taking a closer look at the recorded message of the summit and isolate the key points the two gurus discussed. Keep reading to learn more about what they were offering.

What is Election Survival Summit?

As the presenter introduced the summit, they mention that the two experts would use the event to share their stock picks and alert investors to the mistakes they should avoid to survive in the market.

As they were recording the event, the provisional election results had not been compiled and they predicted a protracted legal battle and uncertainty. The market was stable at the time but they were expecting chaos.

They displayed their track records between February and March, when the market was at its most volatile, to showcase their ability to earn returns regardless of market conditions.

How to make money in a volatile market

One of the takeaways from the summit was Karim and Bryan telling us that you can make money when the market is highly volatile. They even said that volatility is a good thing because it induces momentum and enables you to buy stocks cheaply.

To pick his trades Bryan uses something he refers to as the M-Pattern that predicts the direction of the price of an asset. 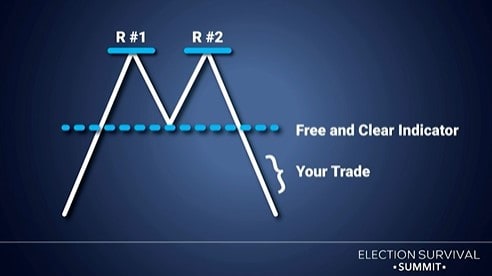 The inverse of that is the W-Pattern which is also used to predict price movement.

The two patterns typically play out in three minutes.

He said that it works on all kinds of assets in a wide range of industries.

Rules for investing during a period of uncertainty

Karim and Bryan shared the rules they abide by to make money when the market is volatile:

Stocks Picks they mentioned during the Election Survival Summit

Both Bryan Bottarelli and Karim Rahemtulla shared a bunch of stocks that they urged their audience to consider.

Bryan named two companies that he said would do well irrespective of who won the presidency:

He picked them because they were carrying out a bulk of the coronavirus testing in the country and he felt that testing would only intensify.

He named the following as good investments in the event of a Trump win:

They are in the banking sector and space exploration and defense niches.

For a Biden win, he went with:

They are in the alternative energy and marijuana industries.

As for the gold rush, he recommends Direxion Daily Gold Miners Inde (NUGT).

He picked Smith & Wesson (a weapons manufacturer) anticipating demand for ammunition as people braced themselves for potential social unrest.

He also touted Gold because the government is printing too much money and that could cause inflation. Gold is a “safe haven” investment people turn to when there is inflation. He mentioned two companies:

In the event of a Biden win, he recommended Blink Charging (BLNK), which offers electrical vehicle charging facilities.

Who are behind the Election Survival Summit?

Bryan Bottarelli is one of the founders of Monument Traders Alliance along with Mr. Rahemtulla.

Bottarelli began his career trading in the Chicago Board of Exchange (CBOE) in the Apple pits. He learned everything he could about trading before quitting in 2006 when he started trading full time and advising other traders.

He claims to have had a 93.67% “win rate” in the market amid the coronavirus crisis thus positioning himself as an authority in chaos investing.

Karim Rahemtulla is a Wall Street veteran. He is the master fundamental analyst and trader at Monument Trader Alliance. CNBC even once referred to him as a “market maven.”

Unlike Bryan who prefers day trading, Karim is more concerned with fundamentals and long-term prospects. The typical holding time of his investments in the past few years has been 48 days.

What does Election Survival Summit promote?

When Karim Rahemtulla and Bryan Bottarelli hosted the Election Survival Summit, they were promoting The War Room.

It is a platform they offer at Monument Traders Alliance that gives investors access to their market analysis. They intend to use it to help their followers navigate the uncertainty surrounding the presidential election.

Bryan tells us that when you join the War Room, you join a community of like-minded individuals.

How does it work?

Karim and Bryan share investment recommendations, giving details such as the name of the stock, the price you should buy at, when to buy, and when to sell. Karim’s stock picks tend to be long-term picks while Bryan’s tend to span minutes, hours, or days.

Some moderators are themselves, seasoned traders. They also give recommendations and general investment advice.

If you join the War Room after watching the Election Survival Summit video, you will receive:

The fee is NON-REFUNDABLE

The Election Survival Summit is a legit event.

The webinar happened live and they even confirmed that while they were shooting the video. During the event, they shared several recommendations of companies and indices that trade on the major exchanges.

That being said, you should not take them as personal advice because all those recommendations were merely shared as general advice.

Not that it has to do with the legitimacy of the event, but it’s comforting to know that Bryan and Karim are accomplished investment analysts with decades of experience between them in the finance industry.

The Election Survival Summit was held to promote The War Room.

Although Bryan and Karim were using their good results during the coronavirus downturn to imply that it means that they know how to navigate the uncertainty surrounding the presidential election, it is not necessarily accurate.

I say this because their performance in March has no bearing on how their trades will perform moving forward; they may have gotten it right then but fail to do so now.