Ian King has made a name for himself within the financial services industry as an analyst who makes bold predictions about the market and this is apparent in his presentation about The End of The Dow.

He claims to be making his biggest prediction to date and that you should take him seriously because he called the Global Financial Crisis.

We will be taking a closer look at his prediction here as well as find out what he thinks will be the number one tech stock for 2021.

What Is The End Of The Dow?

The End of The Dow is a presentation by Ian King through which he predicts that the market is about to be altered in a big way. 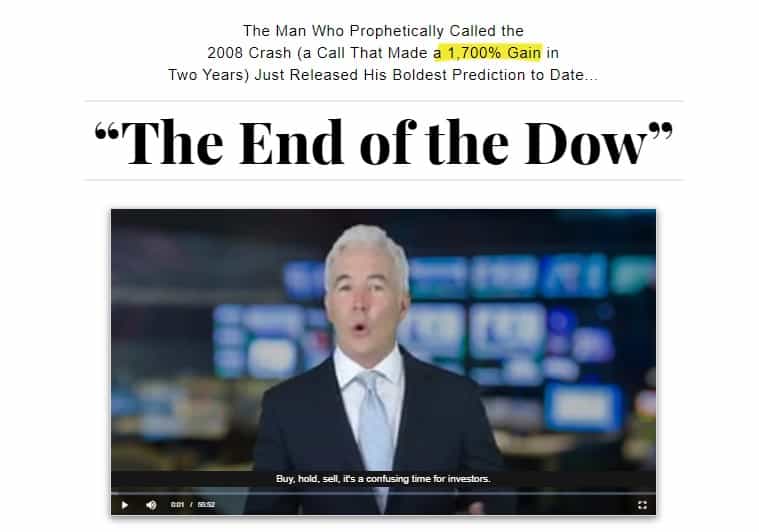 The change he is talking about involves an imminent tech boom that will impact our lives and work. He says that we are about to witness the mass adoption of technologies like 5G, AI, IoT, and other innovations that have already started taking root.

As this shift happens, he says that some companies will grow fast. He gives the example of companies like Zoom, Amazon, Doku, and Docusign benefiting from trends that took the world by storm last year.

He wants us to take advantage of the new technological boom by investing in the right companies.

To find those companies in a congested market, Ian ensures that every viable candidate meets his five conditions:

Finding a company that meets the five requirements is the first step of Ian’s process. The timing of your investment will also be important because he says that tech companies go through three stages of growth before they become household names.

He says that the best time to invest is at the beginning of the Breakout phase because this is when the company has some footing and the potential to grow explosively.

There is a fourth stage that only applies to big companies (that are most likely in The Dow); Demise. A company that is teetering towards its demise is usually weighed down by bureaucracy and a lack of innovation. I think this was what he was alluding to when he named his presentation “The End of the Dow.”

Out of all the stocks he has evaluated, Ian has found one that he expects to do well in 2021. He says that buying it may be like investing in Apple or Amazon early on.

It is disrupting the $74 billion payment processing industry and is a leader in fintech (financial technology). What else do we know about it?

Ian projects that it may go up by 1,000% in the next decade. He wrote everything he wants us to know about it in a report called How to Make a Fintech Fortune that he wants to give away for free to members of his newsletter, Automatic Fortunes.

Luckily, you don’t have to join the newsletter just to find out what company he is referring to because I pieced those clues together and discovered that its name is Square Inc. (SQ). The smoking gun for me was the CEO clue because Ian is talking about Jack Dorsey.

Jack is the CEO of Square and is also the founder and CEO of Twitter. He was on the board at Disney for five years but had to leave in 2018 over conflict of interest.

Ken Fisher, Joel Greenblatt, and David Tepper were early investors of Square Inc. and still retain some of their shares after selling.

Who is Ian King?

He started his career as a desk clerk in the mortgage bond trading department of the Salomon Brothers. He has also worked for Citigroup and a hedge fund called Peahi Capital.

In addition to his other areas of specialization, he is a cryptocurrency expert. He developed a “Crypto Trading” online course for Investopedia Academy.

What you get when you join Automatic Fortunes?

The presentation was meant to promote Ian King’s flagship investment research service, Automatic Fortunes. As he writes to his subscribers, he focuses on companies that are part of 5G, Big Data, AI, and IoT. When you join the newsletter, you are entitled to:

Ian also sends you bonus reports for free when you join via the button below the video. They each focus on industry trends and each comes with a recommendation. They include The Company Leading the Big Data Money Boom, The Company Leading the $12 Trillion 5G Revolution, Buy This Millennial App Now, Five Toxic Stocks to Dump Now, and The Driverless Car Race is Here: Grab Over 100% Gains Now.

Is The End Of The Dow a legit presentation?

The End Of The Dow is a legitimate presentation by Ian King that allows him to talk about how he envisions the technology sector shaping up. Ian is a professional trader and former hedge fund manager who’s been active for many years, which means that he is experienced enough to know how the market works.

He makes ambitious predictions that may not pan out the way he expects but that doesn’t mean that they are false. The bottom line is that you should objectively examine his presentation and take his ambitious claims with a grain of salt.

My Final Word on The End Of The Dow

After sitting through the hour-long presentation, I realized that the title can easily be misconstrued as Ian predicting that the Dow is “about to come to an end.” What I think he meant is that there will be a tech boom that will usher in a new generation of tech companies that will scale up and do well enough to replace some of the companies already on the Dow.

His first candidate is Square Inc. a company that is seeking to dominate the payment processing space. Its progress so far suggests that it is headed in the right direction and Ian expects it to do even better.