Have you come across Alex Koyfman’s presentation concerning “The Most Hated Metal in the World” but don’t know what to make of it?

When I received an email inviting me to check it out, I was curious to see what Alex was referring to and how that was linked to investing.

Therefore, I went through the whole presentation, did a bit of research, and put together this review where I will outline the key points he discussed as well as reveal the name of his “number one stock.”

What is The Most Hated Metal in the World?

Before we even address the key points he raised, I think Alex Koyfman published his presentation “The Most Hated Metal in the World” to pitch his newsletter, Microcap Insider. 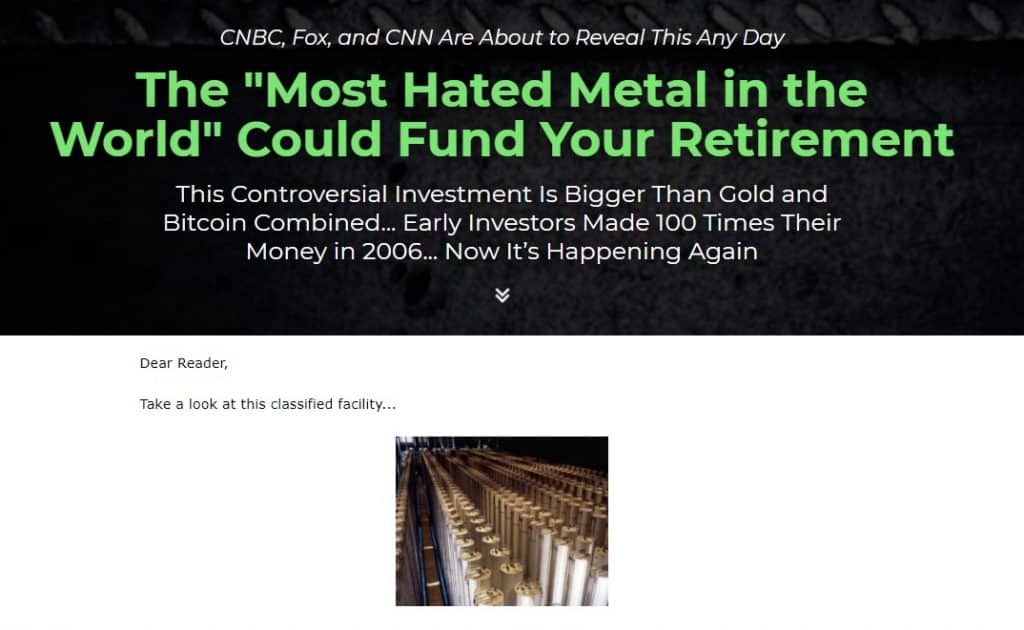 The metal he was referring to is uranium and according to the way he put it, he believes that it will create an investment opportunity that you cannot afford to miss. This is relatively unheard of because most analysts are concerned with gold as we’ve seen with presentations like “A9 Gold Stocks (Adam O’Dell).

He says that people have invested in opportunities related to Uranium in the past and made as much money as people who have traded cryptocurrencies have. The last time people earned big returns was in 2006 when some investors made out with up to 3,677% returns.

He expects Uranium to be a leading wealth-creator in the 2020s because its supply has been shrinking over the past two years. The coronavirus pandemic has only made the already bad situation worse because it led to the closure of some of the oldest and largest uranium mines in the world.

Going by the law of supply and demand, Alex expects the price of the metal to go up, which could have an impact on the market values of the companies with a stake in its supply chain.

In addition to the supply issue, Koyfman has identified another element that could make now the perfect time to invest in Uranium.

He says that many nuclear power plants, which often secure their supply of Uranium using long term contracts, are about to renew their contracts. Coincidentally, several powerplants’ contracts are about to expire and they will be negotiating new terms at roughly the same time.

With the wave of renewals on the horizon he urges his audience to invest in those stocks as soon as possible because he expects prices to go up once those negotiations start.

With the stage set for uranium price rises, he has identified three companies that he thinks will be perfect for investment. He revealed the first two and teased the other one, promising to unveil it if you subscribe to his newsletter. The two are:

He went with them because they are American companies. This is significant because he thinks that the government wants to push out Russian and Chinese companies, which have conventionally been the ones that supplied the country’s demand for the metal.

Since the two countries are strategic rivals to the US, the government has put in place measures to ensure that the contracts will be awarded to domestic companies.

As for the third pick, which he calls it the “Amazon of Uranium,” he dropped a few clues about it that I used to identify it:

After doing a bit of digging, I found out that one company matches the description: Energy Fuels Inc. (UUUU).

The smoking gun for me was this fact sheet I found on its website that confirms that Alex was referring to it. There’s also this article about it entering the rare earth elements industry.

Who is Alex Koyfman?

Alex Koyfman is an investment analyst, stock trader, and financial newsletter editor who works for Angel Publishing (which has links to Agora Financial). He edits a newsletter called Microcap Insider.

Early in his life, he immigrated to the United States from Russia, his native country.

He attended law school and it was at that time that he began trading stocks. Early on, he traded WorldCom stock and made a 6-figure profit, which impacted his life in a major way. Following his success in the market, he decided to not pursue a career in law and instead focus solely on investing.

After he left the legal industry, he started trading and writing a financial blog full-time. His success caught the attention of the editors at Angel Publishing and they brought him on board, where he has been since 2014.

He adopted a scientific approach to analyzing stocks and based his portfolio mainly on microcap stocks.

What Newsletter does Alex promote?

Earlier, I mentioned that Alex did not reveal the name of his number one stock and that I had to join the dots based on the clues to find it.

But what he had intended when he put out the presentation was to request you to sign up for his newsletter, Microcap Insider, so he would give you the name of the stock.

Microcap Insider, as its name suggests, is solely focused on investing in startups while they are at their formative stages (when venture capitalists are involved). Koyfman intended it to be a platform he uses to reveal those companies to his readers so they can invest in them.

Then, when the small unproven companies come good, they earn a sizeable return.

If you join the Microcap Insider as a member, you will receive:

How much will you pay to join Microcap Insider?

The amount you pay depends on whether the publisher is offering a discount. As of writing this, you can join for $999 when, normally, you’d have to pay $1,999.

Are there refunds if you cancel your subscription?

There is a 90-day period from the moment you sign up when you can receive a full refund if you decide to cancel your membership.

Is “The Most Hated Metal in the World” a legit presentation?

I think “The Most Hated Metal in the World” is a legit pitch.

I admit that most people are apprehensive about the marketing approach used by editors like Koyfman because they feel that they hide their true intentions (promoting a newsletter) behind an elaborate story about some magical investment opportunity. But after going through the presentation and looking past the rhetoric, there are some genuine investment opportunities you can learn about from it.

Although his recommendations are not guaranteed to soar, you can pick up some investment tips from the presentation that you can implement in your trading strategy.

“The Most Hated Metal in the World” is uranium. Alex doesn’t quite reveal why he chose to refer to it that way but I suppose it has to do with the stigma surrounding nuclear power plants; particularly, the high profile accidents associated with them.

He thinks that now is the perfect time to invest in uranium because supply is low and many nuclear power plants are about to negotiate new supply terms. And according to him, those factors will lead to an increase in uranium’s price, which could lead to a rise in the values of the companies that supply the metal.

He claims that we could see a repeat of the uranium bubble that was witnessed in 2006 that led to a 3,677% return on investment. However, you shouldn’t follow his advice hoping to capture similar returns because the markets can be unpredictable.

However, I think it is worth considering what Alex is proposing because you never know whether it will turn out to be a good investment opportunity.