Brownstone Research has been promoting an event about something called “The Pre IPO Code” over the past few weeks.

It will be presided over by Jeff Brown, who regards it as the biggest event of his 30-year career.

If it will be that big, what will Jeff discuss, and is it worth getting excited over? Well, in this review, we will be taking a closer look at it as I also give my opinion on whether I think it is a legit webinar.

What is The Pre IPO Code?

Brownstone Research (Jeff Brown) will be hosting an event that they are referring to as The Pre-IPO Code. It is the first event they are broadcasting in 2021 and it will be happening on Wednesday, January 13th at 8 PM. 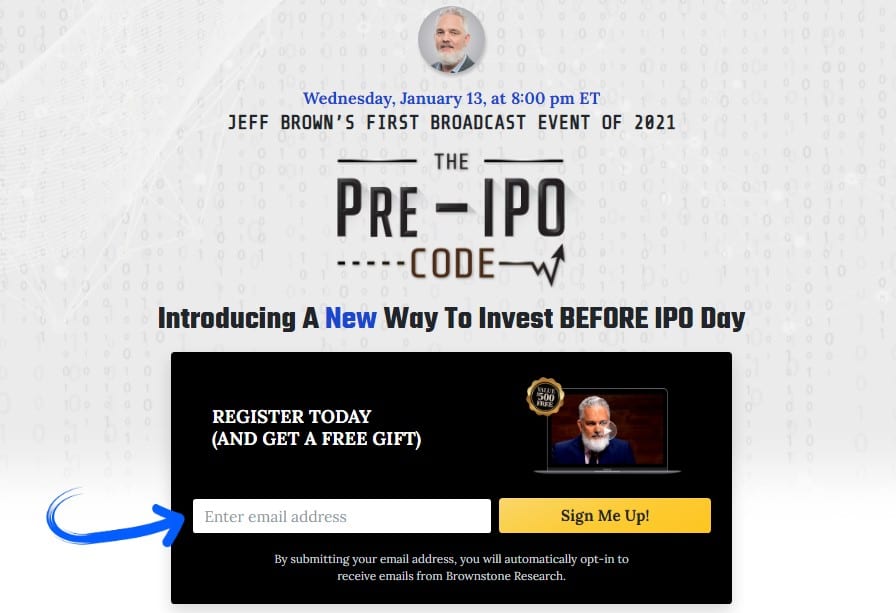 You don’t have to have subscribed to any advisory services offered by Jeff brown or Brownstone Research to attend the webinar. In fact, all you need to do is provide your email address on the landing page and you will be allowed to attend it for free.

When you book your place, you will be entitled to a three-part masterclass by Jeff before the main event.

Before we get into what we should expect him to discuss during the webinar, let’s take a closer look at the man who’ll be hosting the event.

Jeff Brown is the chief investment analyst at Brownstone Research, which is affiliated with another firm called Rogue Economics (previously part of Bonner & Partners). This means that Jeff’s company is likely an imprint of Agora Financial.

Before he started editing investment newsletters, Jeff spent 25 years working in the tech industry as a “high-technology executive.” He worked for companies like Juniper Networks, NXP Semiconductors, and Qualcomm – in their international divisions in Asia.

He then got into angel investing where he specializes in tech startups that he felt he knew quite well due to his ties to the industry. He claims to have access to information about early-stage tech companies that few other people have.

He got into newsletter editing to share his insights about those companies and let his followers in on good investment opportunities. His free e-letter called The Bleeding Edge is a good example of this.

What will be discussed during The Pre IPO Code webinar?

During the webinar, Jeff is expected to talk about “a special type of deal,” which he claims is at the center of a “revolution” that is quietly sweeping the IPO market.

In the invitation, he cites a few big-name investors who are also in on the special deal. They include Kevin Hartz, an early investor of Airbnb & PayPal who said that he thinks it is a revolution. Then there is Stacey Cunningham, the president of the New York Stock Exchange, who said that there is a renaissance in the IPO market.

Jeff insists that anyone can invest in billion-dollar tech unicorns before they go public irrespective of their net worth or even whether they are accredited or not. But to do that, you need to type a special code (which gives the webinar its name) into your brokerage account.

In the invitation, Jeff also mentions that Main Street investors have largely been locked out of lucrative private deals involving companies that went on to be big when they went public. He mentions companies like Amazon, Facebook, Yahoo, just to mention a few.

Is The Pre IPO Code Legit?

The Pre-IPO Code is a legit webinar.

Jeff Brown will use the event to discuss private investing with his audience, which is by no means an illegitimate thing. He will also discuss how he finds the best startups (as he views them), which is no guarantee that they will always be great investments.

One thing that makes people apprehensive about the webinar is his claims that approach to IPOs will help them “potentially see gains beyond people’s wildest dreams,” which is objectively true but also very unlikely because statistically, more startups fail than succeed.

Verdict on The Pre IPO Code

When Jeff Brown hosts the Pre-IPO Code, he will be talking about investing in private companies, but not just any companies. He claims that he will show you how to invest in companies that may be unicorns even when you are not an accredited investor before they go public.

He also tells us that he will reveal a unique approach to startup investing that requires a special code that you have to add to your brokerage account. With it, you will access public offerings of private companies before they IPO.

Private investing comes with its risks because not all private companies make it. On top of that, some companies underperform when they go public thus diminishing the returns you receive from them. That being said, you should attend the event if you can because it is free and you may gain some value from it even if you don’t necessarily follow Jeff’s advice.