Banyan Hill Publishing released a presentation with the header “The Race to Mars is Underway.”

It was recorded by Paul Mampilly, who is known for his future-oriented stock picks. This presentation is no different but this time it focuses on the space industry.

I watched the presentation and put together this review to share the main talking points to enable you to decide what to make of Paul’s claims.

What is The Race to Mars is Underway?

The Race to Mars is Underway is the title of a presentation by Paul Mampilly that he recorded to promote his flagship newsletter, Profits Unlimited.

Besides being an ad for his newsletter, it centers on an ongoing drive by the government and the private sector to explore and possibly settle humans on Mars. Jeff Bezos (Blue Origin) and Elon Musk (SpaceX) having their version of a space race is a good example of this. 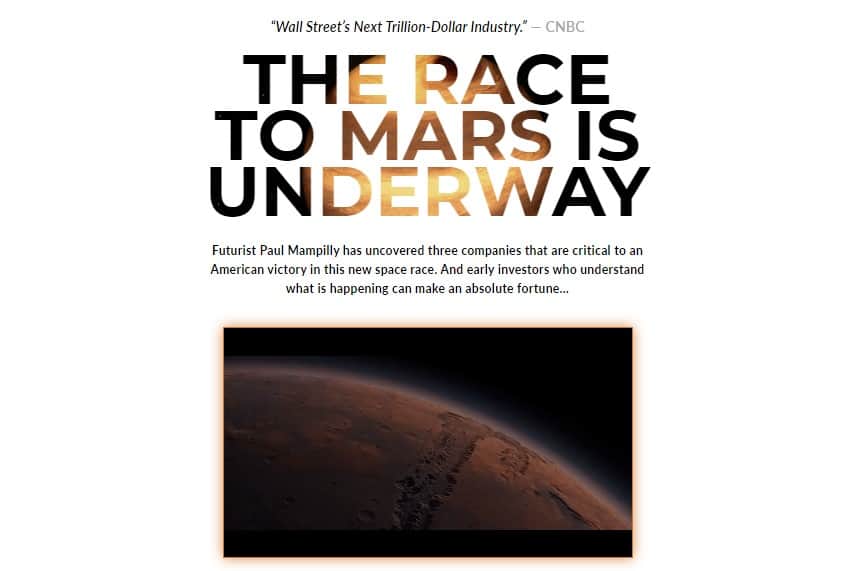 Since Paul is an investment guru, he explores the investment opportunities that such a space race brings. He says that he’s seen investors he considers to be smart pouring money into the space exploration business and he wants to emulate them.

He is confident that it is a serious trend because the government, rich individuals, the military, and 4,000 companies have expressed interest. He even sees the brand-new industry creating a massive booming unlike any other we have ever seen.

He also points to “astonishing innovations” as another reason to take the space exploration industry seriously. For example, he says that we now have better and cheaper technology to handle space flight than we had in the sixties when we put men on the moon.

How to Invest in the Space Race to Mars

Mampilly has found three companies that he wants you to back as the space race gets underway. He recommends that you start buying shares now that they are on the ground floor to earn big returns when their stocks take off.

All factors considered, he expects three key developments to push the space exploration industry on to the next level. They are:

With heightened interest in Mars exploration, which three stocks does Paul want you to consider?

Here are the clues we get from Paul:

The first one is a multiple-award-winning company that is going toe-to-toe with SpaceX. It is a few years old and it is building its proprietary rocket technology to compete with SpaceX’s innovative designs.

The second one employs more than 2,000 people, has annual sales of $600 million, and is valued at less than $1 billion, trading at $15 (these stats are from when Paul recorded the pitch). He says that its technology will be indispensable to astronauts and colonialists who’ll spend the majority of their time away from earth. He says that Elon Musk described its technology as follows: “It’s going to revolutionize design and manufacturing in the 21st century.”

The third company manufactures “digital steel” that solves its clients’ most difficult design challenges. It has been around since the late 1950s and has more than 120,000 customers in the defense and security, communications, aerospace, and industrial markets. Its market cap was $40 billion when the pitch was recorded.

Further details including the names and symbols of the three companies are in a special report that Paul wrote called A Fortune Made in Space: The 3 Hottest Space Stocks to Buy Right Now. You can only get your hands on this report by signing up for his newsletter, Profits Unlimited

Who is Paul Mampilly?

Paul Mampilly, the guy behind this presentation, is an investment guru and professional trader. He is also a newsletter editor who publishes his work via Banyan Hill Publishing. He is responsible for publications like Profits Unlimited.

He also wrote a book titled Profits Unlimited: A Wall Street Insider Reveals the Secret to Life-Changing Wealth to explain how he trades.

Paul has been in the financial services industry for close to three decades because he got his first job at Bankers Trust in 1991 where he was an assistant portfolio manager. He worked for other firms until he became a hedge fund manager.

He left Wall Street at the age of 42 citing a need to focus on helping Main Street investors make better decisions in the market (through his newsletters).

What do you get when you join Profits Unlimited?

Profits Unlimited is Paul Mampilly’s flagship newsletter. When you join, you get a free copy of the report about his three recommended space stocks. It is called A Fortune Made in Space: The 3 Hottest Space Stocks to Buy Right Now.

In addition to that, you get:

Is The Race to Mars is Underway a legit presentation?

The Race to Mars is Underway is a legit presentation brought to us by Paul Mampilly, an investment guru with three decades’ experience in the financial services industry. He brings to our attention the fact that the space exploration industry is one that you can make money in if you make prudent investments.

Although the presentation is legit, you shouldn’t expect to follow his advice and become rich off of those stocks because all investments come with risk.

My Final Word on The Race to Mars is Underway

When Paul recorded The Race to Mars is Underway, he wanted to promote his newsletter (Profits Unlimited) and make us view the space exploration industry as one we can invest in because he expects it to be worth a trillion dollars in the not-so-distant future.

He wants you to invest in pick and shovel companies that don’t get as much press as heavyweights like SpaceX. This is the idea on which the discussion pretty much centers.

As for his recommendations, it is impossible to tell whether they will perform as he anticipates because the market is still nascent. The best thing to do now if you want to follow his advice is to ensure that you only invest what you can afford to lose.