Welcome to my review of James Altucher’s Weed Tirement presentation.

Weed-tirement is a cannabis-based investment recommendation that James thinks is capable of doing better than your 401(k) as a retirement plan.

In this review, I question the logic of his argument and provide you with a summary of what James has to offer. Keep reading to learn more about Weed-tirement.

Weed Tirement is an investment plan designed by James Altucher. It is geared towards financing your retirement.

He says that it grows your nest egg faster than traditional vehicles like your 401(k), albeit with a considerably smaller investment. 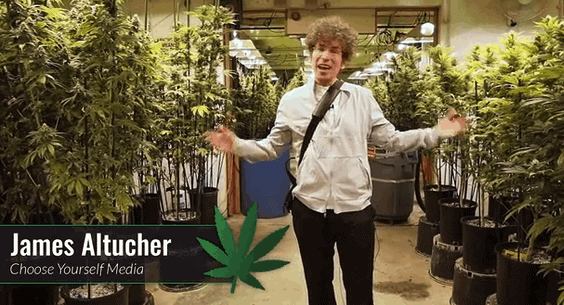 It all has to do with investing in the emerging cannabis market but the focus is on penny pot stocks.

Before we delve into this, if you would like to read about other experts’ takes on marijuana investing, you should take a look at my review of The Next $52 Billion Startup by Michael A. Robinson.

Investing in pot stocks and making money off of those investments is not easy. As a result, many people lose money because a majority of pot companies generate hype but fail to deliver the goods.

In 2018, for instance, only a small number of marijuana stocks ended the year higher than they started it with a majority of major pot stocks flaming out.

Although Canada has legalized the drug and several states in the US followed its example, a majority of companies have not performed as well as analysts had projected despite the optimism that legalization generated.

However, James acknowledges that there are people who are silently making money off of pot stocks.

The goal of Weed Tirement is, therefore, to introduce you to a company that has been minting money for some lucky traders. All they need to get in on it is a small investment.

Even members of the House of Representatives have been investing in the small company in question.

James is so confident in this investment, he thinks it can make for a retirement plan, which explains the portmanteau “Weed-tirement.”

He explains that the reason you have hardly heard about the company is that the SEC keeps it under wraps, prohibiting brokers from advertising it. On top of that, the mainstream financial media does not pay attention to it and the investors who have a stake in it wouldn’t want it to “leak.”

This means that the only way you can discover that it exists is by research.

James says that he stumbled upon it as he was conducting his research and that he is willing to share it with a few lucky subscribers.

In addition to capital gains, when you invest in this company, you receive quarterly payments that commensurate with the size of your investment.

Who is James Altucher?

James Altucher is an entrepreneur, podcaster, author, and technology enthusiast.

He also shares investment advice with his readers as evidenced by this presentation as well as his other presentation titled Alphabrain Alert (7 Day Stock Market Glitch).

He has been actively investing for 25 years, during which time he has managed hedge funds and either founded or co-founded around 20 companies.

He has made mistakes and learned from them.

He has also had his fair amount of success stories. The ones that stand out are his predictions that Facebook and later Bitcoin were huge investment opportunities. Both predictions came true.

How can you join Altucher’s Weed Tirement Plan?

To take advantage of this investment opportunity, you have to invest in the company that James touts in the presentation.

You don’t even have to invest a large sum because he says that even $50 will suffice (although a bigger stake entitles you to a bigger payout). He has written more about the company in a dossier titled Weed-tirement: The Key to a Seven-Figure Pot Pension in the 21st Century.

The caveat is that to reveal the name of this obscure company, you have to subscribe to James Altucher’s newsletter Altucher’s Investment Network.

Objectively speaking, it is not a bad investment because your annual subscription to Altucher’s Investment Network will give you access to a free copy of the Weed Tirement report as well as new investment opportunities and weekly updates touching on those recommendations.

He also sends you an electronic copy of his seminal book on investment, The Choose Yourself Guide to Wealth (It is a call back to his bestselling book, Choose Yourself, but dedicated to entrepreneurship).

You also receive the following bonus reports when you subscribe to Altucher’s Investment Network:

Weed-tirement is legit. I came to this conclusion because James makes valid points about the profit-creation potential of the cannabis industry. Although he goes over the top with his promises, the fledgling industry has the potential to mint millions if legalization becomes widespread.

The legalization that has so far happened in Canada and a couple of states have given us a taste of what’s to come should federal legalization happen in the US.

If that were to materialize, it would open up the largest cannabis market in the world (US) to investment. Although you cannot bet on when that will be the case, many experts believe that it is a matter of “when” not “if” it will happen.

My Final Word on Weed Tirement

If you would like to take advantage of the emerging cannabis industry, James Altucher believes that investing in penny pot stocks is the way to go. In the presentation, he reveals what he says is a safe enough investment to fund your retirement.

The tiny company in question has been paying dividends as well. It has even attracted the attention of members of Congress.

The presentation was designed to promote Altucher’s investment advisory service, which comes with more recommendations. However, you should bear in mind that there are risks to these investments and such an investment is not guaranteed to yield returns.