Three Founders Publishing has been promoting a presentation made by Graham Summers with the heading “America’s Death Spiral.”

It is based on a prediction Graham makes about a “$5.1 trillion financial extinction event” that he expects to happen on April 14, 2021. And, unsurprisingly, he has a solution that you can implement to avert disaster.

In this article, I give you an overview of the presentation by highlighting the main talking points. I also reveal what “extinction event” he is talking about, so stick around for that.

What is America’s Death Spiral?

In America’s Death Spiral, Graham Summers explains how the country is headed towards disaster. He calls it a “financial extinction event” that is slated to happen, leading to social unrest and economic destruction. 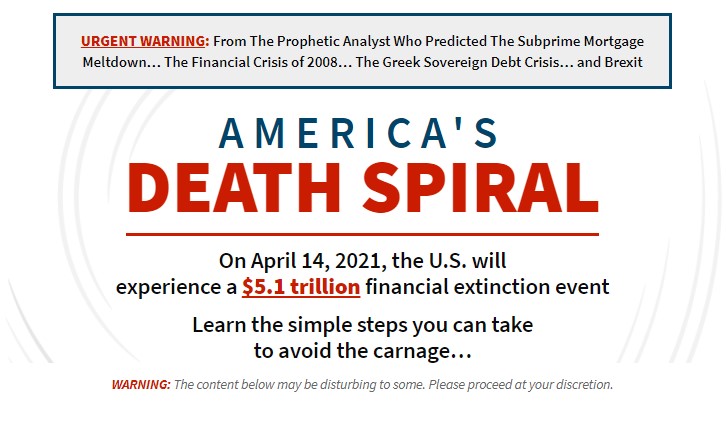 He predicts bank failures, a 70% stock market crash, a 25% unemployment rate, and the implementation of martial law to keep the social unrest at bay.

He blames the Federal Reserve for all that he is predicting to happen.

This feels familiar because we have seen analysts like Robert Kiyosaki (in America’s Final Wealth Transfer) also blame the fed for all our economic problems.

According to Graham, the Fed has been implementing bad monetary policies that have favored the rich and hamstrung Main Street. He gives the example of the Fed setting interest rates at zero in the wake of the Global Financial Crisis in 2008 and describes it as a move that reduced the cost of money for Wall Street banks but wasn’t beneficial to ordinary folks. He also points out that the Fed bailed out banks and big corporations while people’s savings were eroded.

Graham goes on to say that while that money was intended to spur the economy, the banks and corporations kept most of it to themselves and even used it to acquire more debt. Meanwhile, economic growth lagged behind stock market growth and the ordinary people who bore the brunt of the failed policies.

He tells us that all these forced people and small businesses to take on more debt and it is this trend that will lead to a financial meltdown aided by a catalyst: the pandemic.

He expects the “death spiral” to unfold in stages:

Graham pulls back a bit when he says that these horrific events may not happen but the overall impression he gives is that things won’t be so great either.

Having said all that, he offers a solution; a way for you to protect yourself from the doomsday scenario he just painted. His solution is in the form of “bulletproof” strategies of avoiding the ill effects of the “Death Spiral.”

He wrote a report called Crash Proof: Four Invincible Asset-Protection Strategies for the Coming Collapse that details those strategies. Here is a quick summary of the four strategies:

To get a copy of the report, you have to subscribe to his advisory service called Strategic Impact.

Who is Graham Summers?

Graham Summers is the chief market strategist of Phoenix Capital Research, an independent financial research firm in Alexandria Virginia. He is also the founder of Phoenix Press, which is a publishing imprint of Three Founders Publishing.

For the past 15 years, he has been sharing insights with his clients and has made a name for himself as someone who predicts major financial events like the Subprime Mortgage Crisis and The Greek Sovereign Debt Crisis.

He has been featured on Fox Business, CNN Money, and MoneyTalk Radio.

What you get when you join Strategic Impact

Strategic Impact is published by Three Founders Publishing. Graham is the main editor and each month he uncovers “little-known” investment opportunities that generate massive shifts in the financial system.

In addition to monthly issues of the newsletter, here is what you get as a member of Strategic Impact:

It has a 6-month, money-back guarantee.

However, there is nothing wrong with that as he is merely expressing his opinions. It is up to you to look past the hyperboles and see whether you agree with the underlying investment philosophy.

If you scare easy, Graham Summers’ tone in America’s Death Spiral will have you worried for your future. To put it mildly, he sees the economy going down the tubes and he wants you to sign up for his newsletter to help you navigate it.

He draws parallels between the economy during the pandemic with how it was during the 2008 Financial crisis but goes the extra step of warning us that there will be anarchy on the streets. While there has been unrest due to political issues so far, it is unlikely that we will see unrest for economic reasons in the manner that Graham puts it.

That being said, if you are to subscribe to his newsletter, don’t do it out of fear of impending tragedy. Instead, focus on his investment philosophy and his track record.