You have probably received an ad for a presentation by George Gilder about “Donald Trump’s Secret $15.1 Trillion Legacy.”

He says that in Trump’s final year in office, he oversaw a decision that will create $15.1 trillion in new wealth for America.

In this article, I will give you a quick overview of what George is talking about for you to decide what you will make of his proposals.

Donald Trump’s Secret $15.1 Trillion Legacy is the title of a presentation that was recently released by a publishing firm called “Three Founders Publishing.” It was presided over by George Gilder. 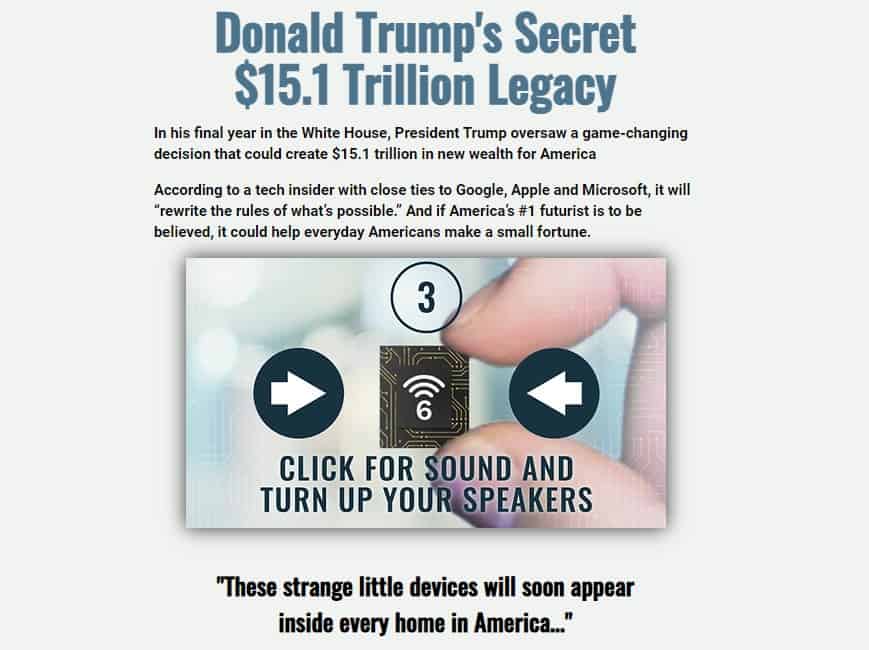 Before we even start going through it, I should mention that it is eerily similar to another presentation by George that has the header “For the first time since 1985, a Federal Ruling is about to unleash trillions of dollars…” In both pitches, he talks about Docket 18-413, Docket 18-295, and an investment opportunity in 5G; the only differences being in the opening dialogue.

Circling back to Donald Trump’s Secret $15.1 Trillion Legacy, George begins the presentation by telling us that most of today’s technology wouldn’t exist if it weren’t for something called Docket 81-413.

Docket 81-413 resulted from the efforts of a guy called Michael Marcus, who challenged the government’s control of the electromagnetic wave spectrum. He tells us that before that, the federal government had a monopoly over the radio wave spectrum.

When Michael challenged this monopoly and won, the government gave up 2.46 GHz of the spectrum to the private sector.

George tells us that Docket 81-413 allowed technology companies to innovate because they had enough bandwidth in the spectrum for wireless communications. This led to the internet, and subsequently, the applications that use the internet, including video streaming, apps, and eCommerce, just to mention a few.

How to cash in on Donald Trump’s Secret $15.1 Trillion Legacy

George says that investors made a lot of money off of companies that benefited from Docket 81-413. However, there is another directive that was given by the FCC in July (2020) called Docket 18-295 that will create other investment opportunities for investors because it opened up 6 Hz of the electromagnetic spectrum to private companies.

What he means by this is that that the FCC held an auction for 5G.

This is not the first time that Gilder is telling us to invest in companies that have connections to the 5G build-out because he did it a while ago while he was touting 15G stocks.

The new portion of the spectrum that has been set aside for 5G will encourage innovation and create profit opportunities for investors. George has his eyes on three companies that he expects to do well when the rollout happens.

The first one manufactures chipsets and it supplies Microsoft, Google, Apple, and other big companies. He states that they had started making their chipsets just one month after the government auctioned 5G bandwidth.

The company that comes closest to fitting that description is Qualcomm. It has been supplying microchips to big tech companies for a while now (QCOM).

The second company on Gilder’s list supplies close to 58 million homes and its network is expected to grow exponentially – doubling every 18-24 months. He expects it to be on the frontline when the 5G rollout begins.

Here, I think he could be referring to Comcast (CMCSA) which provides internet broadband to 58 million homes in the country. It is also involved in 5G through Xfinity Mobile.

The third company made a smart acquisition and now supplies nine of the world’s top ten global internet network operators as well as the top six internet content providers.

Unfortunately, there weren’t enough clues to determine the company he is teasing here.

He wrote a report called Three Spectrum Millionaire-Makers that has details concerning the three stocks if you intend to invest in them. If you would like to read this report, I will reveal how you can access a free copy in a bit. First, let’s take a look at the man behind this.

Who is George Gilder?

George Gilder is a veteran in the finance sector. Having been active for over three decades, he is one of the most experienced people in the financial newsletter business. He is 80 years old.

He was very active in the eighties and nineties before he went relatively quiet. Now he appears to have made a full comeback. I have reviewed a couple of pitches from him in the past year like George Gilder Prediction 2020.

He is on the editorial team of Three Founders Publishing where he edits Gilder’s Moonshots and The George Gilder Report.

What you get when you join The George Gilder Report ($49 per year)?

To get your hands on Three Spectrum Millionaire Makers, you have to sign up for The George Gilder Report. It is an advisory service that focuses its research and analysis on the tech industry. They charge $49 per year for it.

When you become a member, you will receive a newsletter every month as well as weekly updates from George.

As for gifts, in addition to the aforementioned report, you will receive:

If you are dissatisfied with the George Gilder Report and would like to cancel your membership, you have to do so within 6 months. They will refund all your money.

I think the presentation is legit.

George Gilder is one of the most experienced newsletter editors out there. He’s been doing it for such a long time, even President Ronald Reagan read his book and encouraged members of his cabinet to read it. Forbes once called him “The Technology Prophet,” and he wrote a widely popular newsletter in the 1990s called Gilder Technology Report.

The most common complaint people have over a presentation like George’s that leads them to question legitimacy is the language used. George is certainly guilty of this but if you look past the hyperboles, you’ll realize that he is giving his opinion.

After going over Donald Trump’s Secret $15.1 Trillion Legacy, I came away with the following conclusions:

If you intend to sign up for the newsletter, remember that it renews automatically every 12 months.