Larry Benedict was recently interviewed by John Burke in an event dubbed the 7 Day Blitz Summit.

The topic that dominated the discussion was the concept of “a 7 Day Blitz” – a period during which investors can make a killing if they make the right moves.

I watched the whole thing and came away with some conclusions and I would like to share them with you in this review.

What is the 7 Day Blitz Summit?

The 7 Day Blitz Summit is a presentation that was recently published by Larry Benedict. By the end of the video, he promotes a newsletter he edits called The S&P Trader. 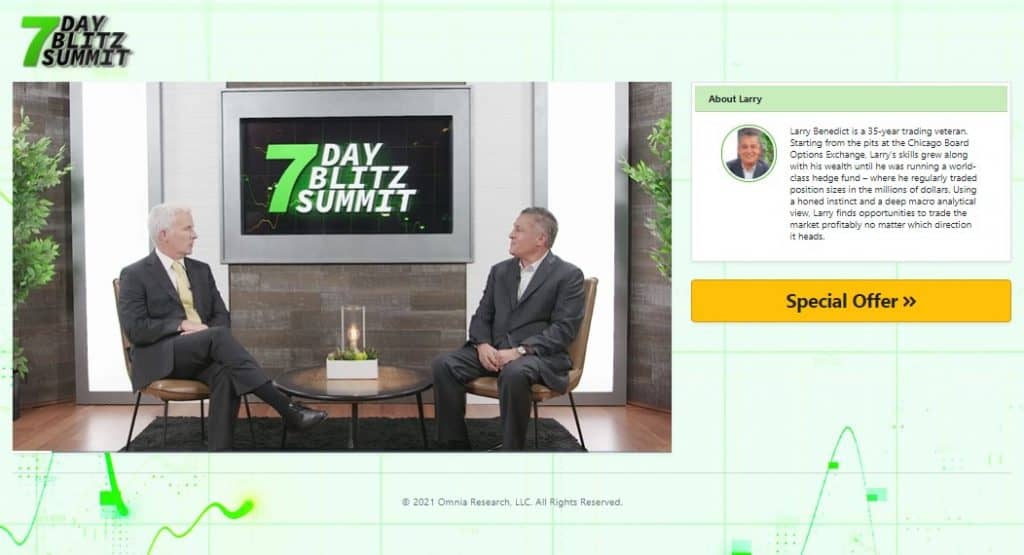 According to Larry, “The 7 Day Blitz” is a week in March during which a lot of money changes hands. However, he says that it has nothing to do with the Earnings Season.

He says that this phenomenon is guaranteed to play out because it is enforced by an organization that is supervised by the Federal Government. As all this happens, he tells us that he uses one ticker to trade.

After watching the presentation, I realized that the organization he is talking about is the Options Clearing Corporation (the OCC), which is regulated by the federal government.

The phenomenon he is talking about is the simultaneous expiration of Stock Index Futures, Stock index options, Stock options, and Single stock futures. He says that all these derivatives expire at the same time in the third week of March and since they have to all be fulfilled by the OCC, a lot of money changes hands. This year, he expects up to $1.2 trillion to change hands.

The one ticker he trades is the S&P 500 Index (SPX). He doesn’t just buy and hold like other passive traders; he trades options on it.

How does Larry Benedict trade Options?

A bullish spread increases in value as the underlying asset goes up and a bearish one increases as the asset depreciates.

If you want to trade like Larry and receive his recommendations, you have to sign up for his newsletter, The S&P Trader.

Who is Larry Benedict?

Larry used to be a hedge fund manager before he began writing newsletters and has been in the world of investment for 35 years. His journey began at the Chicago Board Options Exchange where he was a market maker.

He claims that when he was running hedge funds between 1990 and 2010, he never had a year where he made losses. During the Global Financial Crisis in 2008, he claims that his fund had its best year, making $95 million.

How does The S&P Trader work?

The S&P Trader is one of two newsletters published by Larry Benedict at his firm. He says that he employs a more advanced strategy with it than with the other newsletter. As we’ve already established, he uses a vertical spread options strategy.

When you join The S&P Trader, you should expect to receive:

A one-year subscription costs $2,000 but you get a free year so it adds up to two years.

Larry does not give cash refunds. However, you can cancel your membership within 90 days for credit that you can spend on any other product offered by the publisher or its corporate affiliates.

Is The 7 Day Blitz Summit legit?

The 7 Day Blitz Summit is a legit presentation. Larry Benedict is an experienced trader with decades of experience as a trader. Although that doesn’t guarantee that he is offering credible advice, it indicates that he is as close to credible as one can get. The presentation is legit because Larry gets to share his perspective. However, that doesn’t mean that it is a great strategy that is guaranteed to work because no strategy ever is.

My Final Word on the 7 Day Blitz Summit

During the 7 Day Blitz Summit, Larry got to promote his newsletter, The S&P Trader. As the name suggests, it has to do with the S&P 500 Index (SPX), on which he trades index options. He uses the vertical spread strategy to minimize risk. Note that although this strategy limits risk, it also diminishes the possible returns you can earn off of each trade.

Although the crux of the presentation was to discuss a week-long phenomenon that can create the opportunity to earn profits, Larry didn’t explicitly tell us how he will be trading the rest of the time (safe to say he will be trading options).

Although Larry sounds confident with his method, do not invest more money than you are comfortable losing (assuming you decide to join his advisory service).