Have you seen the presentation by Whitney Tilson about TaaS?

I recently got an email from Whitney promoting it, so I decided to check it out.

Is the proposition any good or is it just a ploy to get you to subscribe to a newsletter?

Keep reading the review to learn more about TaaS and its viability as an investment consideration.

Transportation-as-a-Service (TaaS), is about to witness a major shakeup according to Whitney Tilson.

The founder of Empire Financial Research believes that we are about to see major changes to TaaS that will impact other sectors too. 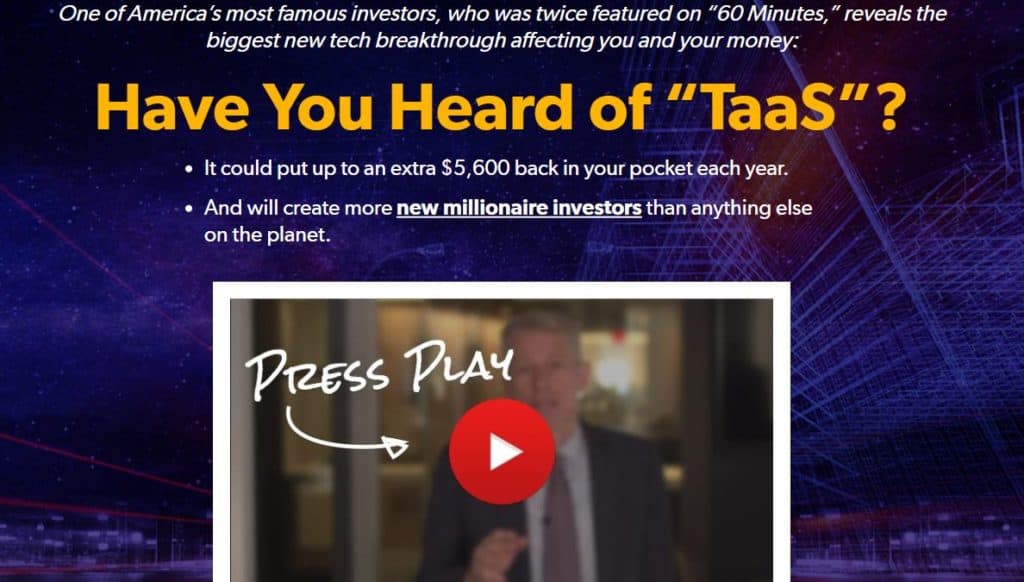 He says that it will be so impactful, it could alter the way we live our lives and pay for goods and services.

More importantly, and in the context of the presentation, it will create money-making opportunities for savvy investors (or people who heed to his advice).

He says that you should not make the mistake of downplaying the significance of the concept and how massive it could prove to investors.

He cites examples of previous revolutionary trends that altered people’s lives and made people rich. In each of those instances, most people ignored the signs thereby missing out on life-changing opportunities.

He gives the example of the internet, the introduction of the iPhone, and a few other big trends.

He warns that TaaS is similar to those other trends in that sense and that you should take action fast.

That sounds familiar as we have seen with other presentation I have reviewed here, like Tiny Silver Smart Antenna and Teeka Tiwari 5 Coins to 5 Million where the editor wants you to act fast to not miss out.

Who is Whitney Tilson?

Whitney Tilson, the guy touting TaaS stocks, is the founder and current CEO of Empire Financial Research. It is a publisher like Agora Financial and Investorplace.  He edits the flagship newsletter service, Empire Stock Investor, and another service called Empire Investment Report.

He is an author and a former hedge fund manager. He has written two books on investing. One of them is called The Art of Value Investing: How the World’s Best Investors Beat the Market and the other is More Mortgage Meltdown: 6 Ways to Profit in These Bad Times.

Speaking of his career as a hedge fund manager, he started a hedge fund with a capital outlay of $1 million and grew that to $200 million.

He has appeared on CNBC, Bloomberg TV, and Fox Business Network and writes op-eds for The Financial Times, TheStreet.com, Forbes, The Motley Fool, and Kiplinger’s. He made two appearances on the investigative show 60 Minutes.

How does TaaS work?

Whitney says that TaaS is the culmination of two convergent technologies. He says that any major trend we have witnessed in the tech industry was caused by two or more technologies emerging at the same time, creating the right conditions for it to blossom.

In the case of Transportation as a Service, he says that two developments that are already underway will be instrumental:

With the two developments, TaaS will be a thing because there will be fleets of electric autonomous cars that people will use for transportation. It will be like Lyft and Uber, but for electric driverless vehicles.

To make money from these developments, Whitney has identified four investments that you need to get in on:

If you would like to receive the three reports, you have to subscribe to Whitney’s newsletter, the Empire Stock Investor.

When you join Empire Stock Investor, you will receive new recommendations every first Wednesday of the month; daily email updates when the markets are open; and two bonus reports, The Industries Most Affected by the Driverless Car Revolution and The Perfect Portfolio.

One year of the Empire Stock Investor costs $49.

The subscription comes with a 30-day money-back guarantee.

The TaaS presentation is legit. First, electric cars are getting as good as Whitney says they are.

Manufacturers are figuring ways to make them cheaper and more efficient than traditional gasoline-powered ones. Consequently, traditional car-makers are investing heavily in electric cars because they realize that the future will be in EVs.

Driverless cars have also made massive strides in the past decade. Google’s Waymo is edging closer to mass adoption and other major players in the car-making industry want in on this segment of the industry. Tesla’s infamous driverless test drive got people talking and it’s starting to become apparent that electric autonomous cars are not a pipe dream.

Whitney is right about both electric cars and driverless cars; therefore, I think his presentation is legit.

Whitney Tilson is convinced that TaaS will be the next generational trend in terms of how it will change our lives and make for a lucrative investment.

To be fair, he has made a couple of correct calls over the years that have benefited his readers.

We can’t definitively tell whether he will be right this time because a lot has to happen for his vision to be realized (at least to the scale he is talking about).

I think it is worth checking out what his recommendations are (for $49) because he may be on to something legit here. However, do not invest money you cannot afford to lose.

TaaS stands for Transportation as a Service and refers to Whitney Tilson’s presentation for investing in TaaS. He believes this industry is going to see a huge shakeup.

Who Is Whitney Tilson?

Whitney Tilson, the guy touting TaaS stocks, is the founder and current CEO of Empire Financial Research. He is also a former hedge fund manager.

How To Invest In TaaS Stocks?

When you join Whitney Tilson’s Empire Stock Investor service you will receive a report about the driverless car revolution. This report essentially talks about the 2 industries that are merging which are EVs and driverless car technology. The service shares the stocks that will be best positioned to see gains from the rise of this industry.

Yes, Whitney Tilson has a strong background in investing having managed a hedge fund. The TaaS stocks also stack up. The technology for EVs and driverless cars is definitely starting to come together so there is no reason to suggest that TaaS is not legit.